Just Play announced the creation of its first European subsidiary last year, and on 1st January it officially opened. 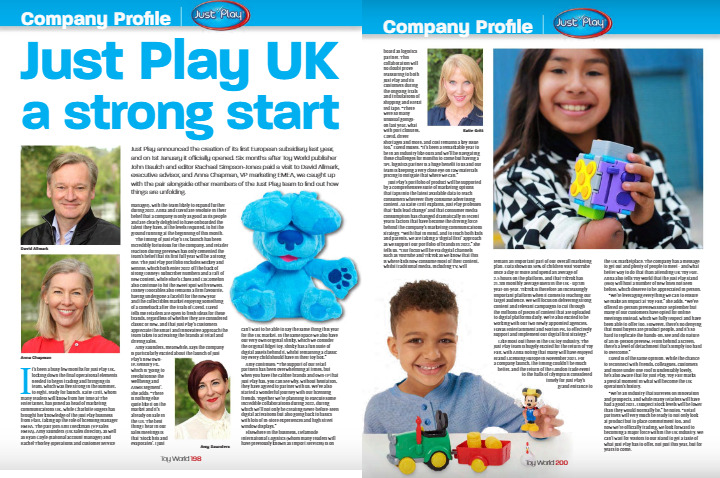 Just before Christmas, six months after Toy World publisher John Baulch and editor Rachael Simpson-Jones first paid a visit to David Allmark, executive advisor, and Anna Chapman, VP marketing EMEA, we caught up with the pair, plus other members of the Just Play team, to find out how things were unfolding ahead of the official 1st January launch.

The past few months have been busy for Just Play UK, locking down the final operational elements needed to begin trading and bringing its team, which was five strong in the summer, to eight, ready for launch. Katie Gritt has joined as head of marketing communications UK, while Charlotte Rogers has brought her knowledge of the Just Play business from Flair, taking up the role of licensing manager EMEA. The pair join Ami Dieckman (VP sales EMEA), Amy Saunders (UK sales director), as well as Ryan Coyle (national account manager) and Rachel Thorley (operations and customer service manager), with the team likely to expand further during 2022.

The Just Play portfolio includes Mickey and Minnie, Blue’s Clues,  CoComelon and Disney Doorables. David tells us retailers are open to fresh ideas for these brands and that Just Play’s customers appreciate the smart and innovative approach the team takes to activating the brands at retail and driving sales. Amy Saunders, meanwhile, says the company is particularly excited about the launch of Just Play’s new own-IP, Sensory FX, which is ‘going to revolutionise the Wellbeing and ASMR segment’.

Like most out there in the UK toy industry, The Just Play team is hugely excited for the return of Toy Fair. For a company launch, the timing couldn’t be much better for Just Play’s grand entrance to the UK marketplace. The Just Play stand (B60) will host a number of new lines not seen before, which deserve to be appreciated in person. “We’re leveraging everything we can to ensure we make an impact at Toy Fair,” Anna adds.

To read the full piece from the January issue of Toy World, which details Just Play’s marketing strategy for the year ahead and how the company’s partnership with Delamode International Logistics will help it overcome shipping challenges and Brexit red tape, click here.