Mike Derse is director of Business Development at Learning Express Toys and reports on his recent visit to the Toymaster May Show in Harrogate. 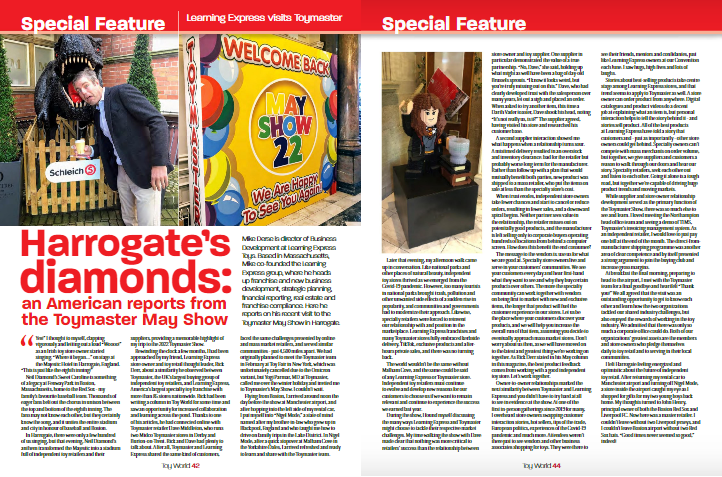 Mike knew he was among like minded people one evening at the Majestic Hotel in Harrogate, when an Irish toy store owner started singing: “Where it began…” on stage.

Neil Diamond’s Sweet Caroline is something of a legacy at Fenway Park in Boston, Massachusetts, home to the Red Sox – Mike’s family’s favourite baseball team. The fans may not know each other, but they certainly know the song, and it unites the entire stadium and city in honour of baseball and Boston.

“In Harrogate, there were only a few hundred of us singing, but that evening, Neil Diamond’s anthem transformed the Majestic into a stadium full of independent toy retailers and their suppliers, providing a memorable highlight of my trip to the 2022 Toymaster Show,” he writes.

Mike had been approached by friend, Rick Derr, about a similarity he observed between Toymaster and Learning Express, America’s largest specialty toy franchise with more than 85 stores nationwide. Rick has been writing a column in Toy World for some time and saw an opportunity for increased collaboration and learning. Toymaster and Learning Express share the same kind of customers, faced the same challenges presented by online and mass market retailers, and served similar communities – just 4,500 miles apart. Yogi Parmar, MD at Toymaster, soon issued an inviitation to Toymaster’s May Show.

“During the show, I found myself discussing the many ways Learning Express and Toymaster might choose to tackle their respective market challenges,” Mike explains. “My time walking the show with Dave Middleton made clear that nothing was more critical to retailers’ success than the relationship between store owner and toy supplier.”

Mike found his time in Harrogate interesting and productive. “Attendees weren’t there just to see vendors and other business associates shopping for toys,” he writes. “They were there to see their friends, mentors and confidantes, just like Learning Express owners at our Convention each June. I saw hugs, high fives and lots of laughs. I left Harrogate feeling energized and optimistic about the future of independent toy retail.”

Find out more of Mike’s thoughts about the show, and the indie toy market on both sides of the pond, in the following article which he wrote after his visit. The article appears in the July edition of Toy World here.

Keep an eye out too for a follow up article, where members of Toymaster made a reciprocal trip to the Learning Express Convention in Florida.