Exclusive: Nice to see you, to see you nice – Toy Fair review

Toy World editor Rachael Simpson-Jones takes a look at Toy Fair’s hugely successful return to the trade show calendar and finds out what made it such a hit. 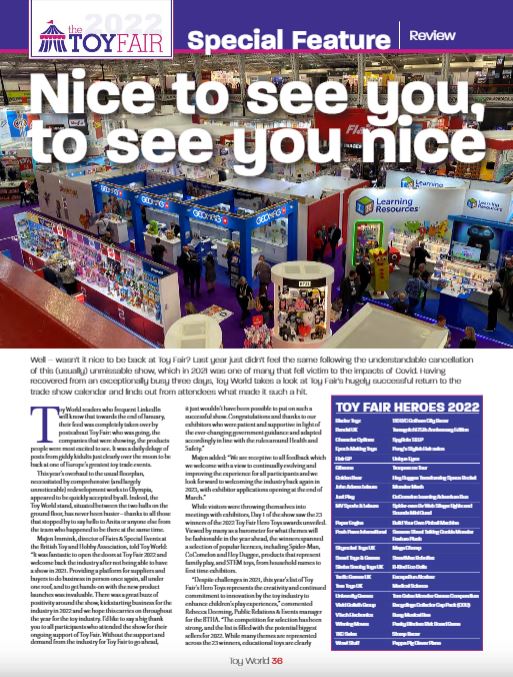 Well – wasn’t it nice to be back at Toy Fair? This year’s overhaul to the usual floorplan, necessitated by comprehensive (and largely unnoticeable) redevelopment works to Olympia, appeared to be quickly accepted by all. Indeed, the Toy World stand, situated between the two halls on the ground floor, has never been busier – thanks to all those that stopped by to say hello.

Majen Immink, director of Fairs & Special Events at the British Toy and Hobby Association, told Toy World: “It was fantastic to open the doors at Toy Fair 2022 and welcome back the industry after not being able to have a show in 2021. There was a great buzz of positivity around the show; I’d like to say a big thank you to all participants who attended for their ongoing support of Toy Fair.”

Triumphs were celebrated as the 2022 Toy Fair Hero Toys Awards were unveiled on Day 1, as were the winners of the 57th annual Toy Industry Awards by the BTHA and the Toy Retailers Association (TRA). Day 2 saw the The Editors Choice Awards highlight more fantastic product and the Best Stand Awards recognise innovative exhibitors.

As well as the meetings taking place, there was also time for fun. On the Just Play UK stand, Toy Fair visitors were asked #ThinkYouCanSlink? Head of marketing Katie Gritt told us: “It was great to give visitors the opportunity to have some fun with Slinky. There was certainly lots of laughter, which was great to hear.”

At Golden Bear, people were dressed up in cow ponchos, desperately pumping an ‘udder’ to avoid being squirted with water, and MV Sports offered visitors the chance to win an incredibly cool Batmobile style electric ‘scooter’.

Schleich’s trade marketing manager, Paul Dearlove said: “In terms of visitor quality, it was without doubt a marked step up from recent years – we’d go as far to say it was the best representation we have ever seen on our stand.”

“This was Reydon Sports’ first time exhibiting (and visiting) the Toy Fair, and what a first experience it was,” enthused Andy Griffin, marketing director. “The atmosphere was fantastic across the whole three days, and we met with some great clients inside and outside of the industry. Our first-time advertising in Toy World magazine also made a huge impact. Shouting about our business model, USP and stand number generated lots of leads.”

Nazneen Yasin, founder of new entrant to the UK toy industry, Fabula Toys, added “Over the three days, we clocked multiple orders from independent shops across the country as well as distributors internationally.”

“It made an enormous difference being able to have real conversations and get proper feedback, presenting ranges in front of the product instead of via a camera,” commented Nicola Bergot, UK managing director, Magic Box UK. “You really can’t beat it, and it was evident how much it has been missed.”

Howard Shaw of Chester Toy Wholesalers, added: “Toy Fair also offers those chance meetings; catching up with a friend you might not have seen for too many years, or saying hello personally to a customer you recognise. The BTHA, exhibitors and visitors can be rightly proud of a show well executed. The general positivity around the whole event proves we are an industry that likes to get stuck in, and crack on. That has to be celebrated.”

The BTHA’s Majen Immink concluded: “We look forward to welcoming the industry back again in 2023, with exhibitor applications opening at the end of March.”

To read the full article, which appeared in the March edition of Toy World, click here.