Exclusive: Nick Gibbs-McNeil of Kidzcoolit on the impact of cinematic disruption

Nick, publisher and editor of Kidzcoolit and Youthgotit, tells Toy World why he takes issue with Hollywood calling the shots on global film releases. 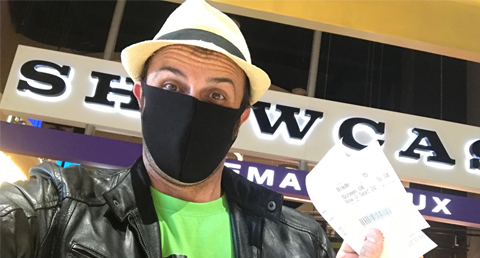 Nick Gibbs McNeil has carved a career for himself in both the film and toy industries, and is a huge fan of a trip to the cinema, as is his wife. So, it was a surprise to hear himself admit near the start of lockdown that he hadn’t heard anyone else say they missed going.

“My first memory of the cinema, like many adults my age, was seeing the first Star Wars film when I was only three years old,” Nick explains. “Yes, you read that correctly – my mum took me to see Star Wars at three. I sat quietly throughout and remember much of my initial cinematic experience. This was a strange time in my life, as I had recently lost my father, while my mother had just given birth to my little brother. Through my adult eyes and many conversations with family members over the years, I know this was a difficult period of my early life, but all I can remember is being “in a galaxy far, far away…” I was either in the garden wielding a lightsaber, battling my older cousin (who was always Darth Vader) for hours at my auntie’s house, or simply collecting and playing with my figures and ships on the bedroom floor, completely oblivious to the disruption and heartache going on around me.”

Nick adds: “During dark times, we need escapism. As much as many of us have been very lucky ‘so far’ during this ghastly pandemic, it’s not always easy to keep a smile on your face. And that is why movies and TV shows are so incredibly important to our coping mechanism during challenging periods like this.”

Nick is frustrated by Hollywood dictating when films should be released around the world, noting that UK cinemas are open for business but have nothing new to screen. He says “At the moment, the US is in chaos and doesn’t appear to have the virus under control. I know I’m no qualified scientist, but it seems illogical for Hollywood to decide when movies can be released around the rest of the world, when the US could be years behind in opening its own cinemas – or even going into movie production again.”

One solution Nick proposes is handing ‘full control to the European studio heads of each company and move production to the UK, New Zealand and other ‘safer’ countries, until the US can get its house in order’. And once life is back to normal – or as normal as it ever will be – we can go back to Hollywood being in charge.

“During this crisis, there are many children that need to be Wonder Woman, James Bond, Black Widow, Gru and even Peter Rabbit – but they’ve not seen these movies yet and they don’t have the toys to re-live the screen magic and escape this unsettling landscape,” Nick says. “The way Hollywood is dictating things is harming how children – and adults too – find their escapism, as well as hurting many diverse entertainment-based livelihoods.”

To read Nick’s full Viewpoint, which was published in the September issue of Toy World, click here.