Melissa Symonds of NPD presents the latest data for the UK toy market, with a look at the contribution of licensed toys to overall sales. 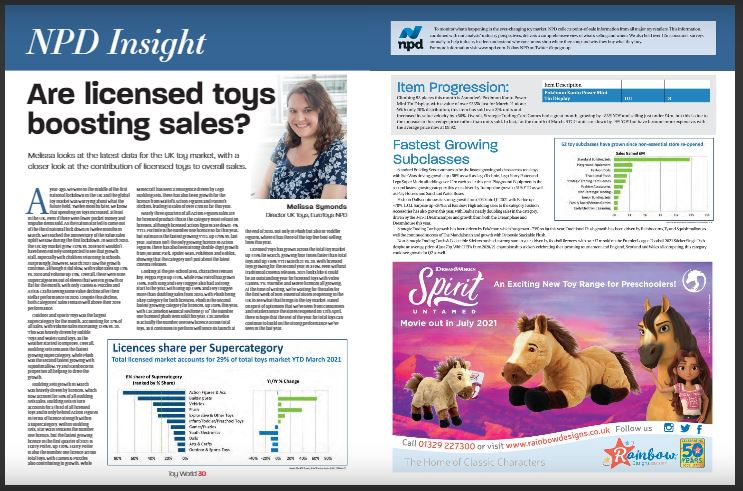 As the nation started to come out of the third national lock down in twelve months in March, we reached the anniversary of the value sales uplift we saw during the first lockdown. In March 2020, the UK toy market grew +12% vs. 2019 so it wouldn’t have been entirely unexpected to see that growth stall, especially with children returning to schools. Surprisingly, however, March 2021 saw the growth continue, although it did slow, with value sales up +3% vs. 2020 and volume up +3%. Overall, there were nine Supercatgeories out of eleven that were in growth or flat for the month, with only Games & Puzzles and Arts & Crafts seeing some value decline after their stellar performance in 2020.

Melissa examines which categories are currently heavily driven by licences, which can have a huge impact on sales. She also looks at which licences are the most popular, helping to drive these sales, and which licensed properties are showing strong growth. With licensed properties representing the latest cinematic releases and TV characters now being challenged by those from gaming success stories, the Licensed Toys sector is growing four times faster than total toys, up +16% YTD March 21 vs. 20.

“Even without traditional blockbuster cinema releases, 2021 looks like it could be an outstanding year for licensed toys,” says Melissa. “Based on the spirit of optimism that we’ve seen from consumers and retailers since stores reopened on 12th April, there is hope that the rest of the year for total toys can continue to build on the strong performance we’ve seen in the last year.”

To read the full article, which appeared in the May edition of Toy World, click here.