This month, NPD’s Melissa Symonds looks at the areas of the UK toy market that are thriving as the industry continues to face challenges, finding some unexpected heroes. 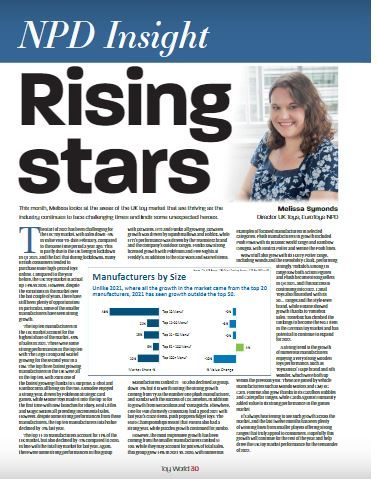 The start of 2022 has been challenging for the UK Toy market, with NPD data showing sales down -5% in value Year-To-date February, compared to the same time period a year ago. This is partly due to the UK being in lockdown in Q1 2021, and the fact that during lockdowns, many British consumers tended to purchase more high-priced toys online. Compared to the year before, the UK Toy market is actual up +4% vs 2020. However, despite the variations in the market over the last couple of years, there have still been plenty of opportunities; in particular, some of the smaller

Manufacturers ranked 21 – 50 also declined as group, down -2% but it is worth noting the strong growth coming from Ty as the number one plush manufacturer, and Bandai with the success of CoComelon, in addition to growth from Miraculous and Tamagotchi. Elsewhere, One for Fun (formerly Grossman) had a good 2021 with last year’s craze items, push poppers/fidget toys. The Euro Championships meant that Panini also had a strong year, while puzzles growth continued for Jumbo.

However, the most impressive growth has been coming from the smaller manufacturers ranked 51 – 100 by NPD. While they may account for just 6% of total sales, this group grew +4% in 2021 vs. 2020, with numerous examples of focused manufacturers in selected categories.

Read on to find out which manufacturers are enjoying success, as well as the product with the strongest item progression and the fastest growing properties. To access the full NPD Insight article, which appeared in the April edition of Toy World, click here.