Toy World finds out what innovative new ‘entertainment commerce’ platform OOOOO offers, how it works and why toy companies should get involved. 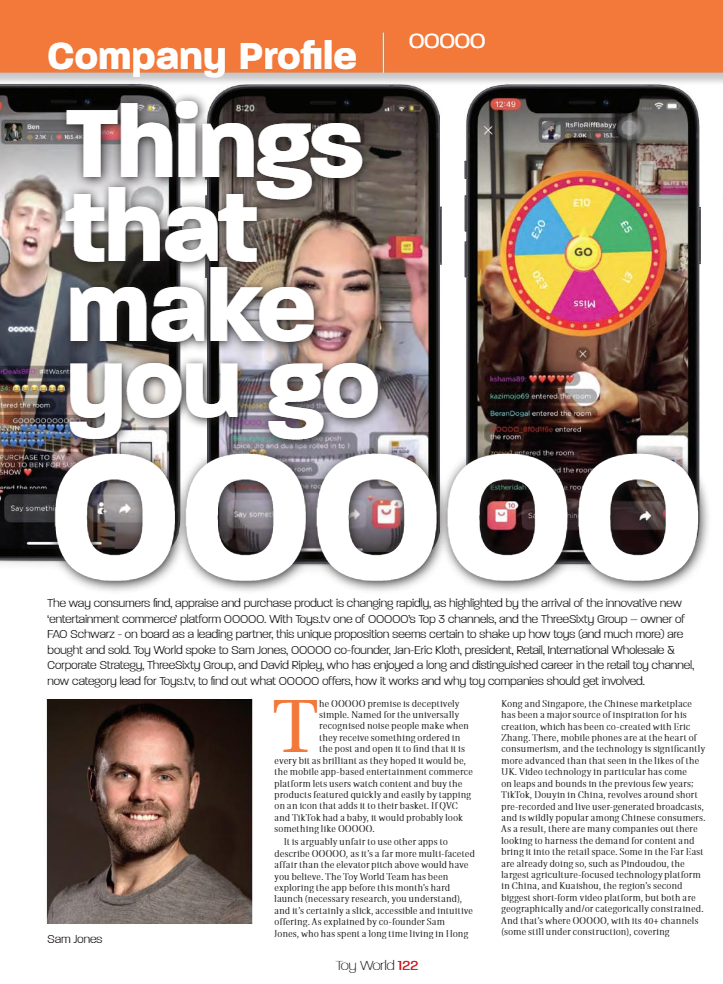 The way consumers find, appraise and purchase product is changing rapidly, as highlighted by the arrival of the innovative new ‘entertainment commerce’ platform OOOOO. With Toys.tv one of OOOOO’s Top 3 channels, and the ThreeSixty Group – owner of FAO Schwarz – on board as a leading partner, this unique proposition seems certain to shake up how toys (and much more) are bought and sold. Toy World spoke to Sam Jones, OOOOO co-founder, Jan-Eric Kloth, president, Retail, International Wholesale & Corporate Strategy, ThreeSixty Group, and David Ripley, who has enjoyed a long and distinguished career in the retail toy channel, now category lead for Toys.tv, to find out more.

The OOOOO premise is deceptively simple; the mobile app-based entertainment commerce platform lets users watch content and buy the products featured quickly and easily by tapping on an icon that adds it to their basket. If QVC and TikTok had a baby, it would probably look something like OOOOO.

The Toy World Team has been exploring the app before this month’s hard launch, and it’s a slick, accessible and intuitive offering. As explained by co-founder Sam Jones, who has spent a long time living in Hong Kong and Singapore, the Chinese marketplace has been a major source of inspiration for his creation, which has been co-created with Eric Zhang. There, mobile phones are at the heart of consumerism, and the technology is significantly more advanced than that seen in the likes of the UK. Video technology in particular has come on leaps and bounds in the previous few years; TikTok, Douyin in China, revolves around short pre-recorded and live user-generated broadcasts, and is wildly popular among Chinese consumers. As a result, there are many companies looking to harness the demand for content and bring it into the retail space.

“The OOOOO platform is first and foremost founded upon entertainment,” Sam tells us. “We’re showing viewers a toy being played with and demonstrated in very much the same way you would be when you visit a good experiential toy store, but embedded behind the content is the ability to buy that toy and have it sent straight to your house or office, without ever having to leave the app. Our team wants to be one of the first to take the entertainment commerce proposition into western markets, with toys positioned as one of the three biggest categories offered through OOOOO via Toys.tv.”

Toy companies and brands looking to get in on the action have plenty of options to consider when it comes to content creation. OOOOO offers a more cost-effective way to bring products to market and sell them compared to platforms such as Instagram or Facebook, which charge for advertising and push consumers out to external sites.

OOOOO will be launching a standalone Toys.tv app later this year, on which 100% of the content will be related to toys and games. Demarcating OOOOO and the Toys.tv app recognises that while parents will lean towards the former, given that a number of its channels focus on products and contents geared towards an older audience, Toys.tv will primarily attract kids.

To read more about this new and developing concept, see the full article, which appeared in the April edition of Toy World, here.

Readers can contact David Ripley on david@ooooo.com, or download the app from the App Store or Google Play.