The Love, Diana brand has enjoyed an incredible six months since its launch in October 2020; Pocket.watch’s Danny Spronz tells us more. 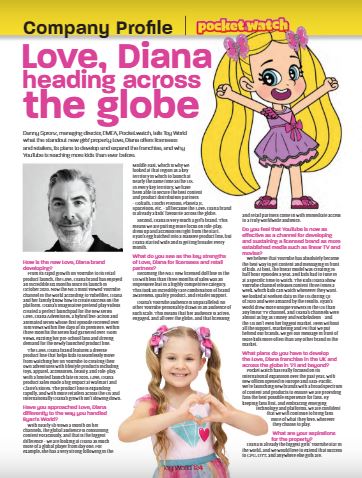 Danny Spronz, managing director, EMEA, Pocket.watch, tells Toy World what the standout new girls’ property Love, Diana offers licensees and retailers, its plans to develop and expand the franchise, and why YouTube is reaching more kids than ever before.

From its rapid growth on YouTube to its retail product launch, the Love, Diana brand has enjoyed an incredible six months since launch. Now the No.3 most viewed YouTube channel in the world according to Tubefilter, Diana and her family know how to create success on the platform. Diana’s imaginative pretend play videos have created a perfect launchpad for the new series Love, Diana Adventures, a hybrid live-action and animated series. The first episode received over 10m views within five days of its premiere and within three months the series had garnered over 150m views, driving demand for the newly launched product line.

Danny told us more about the product line, which is expanding rapidly. Pocket.watch is no stranger to this type of rapid success, which the company has already experienced with Ryan’s World. However, Danny explained that there are differences between the two properties, which have different key territories, necessitating a different approach.

“Diana is already the biggest girls’ YouTube star in the world, and we would love to extend that success to CPG, OTT, and anywhere else girls are,” Danny told us.

With more on the company’s plans to develop the Love, Diana franchise in the UK and across the globe in ’21 and beyond, plus Pocket.watch’s aspirations for the property, read the full article, which appeared in the Licensing World section of the May edition of Toy World, here.