Kidzcoolit’s Nick Gibbs-McNeil looks at how the connection between entertainment and the kidult market has shifted during the pandemic. 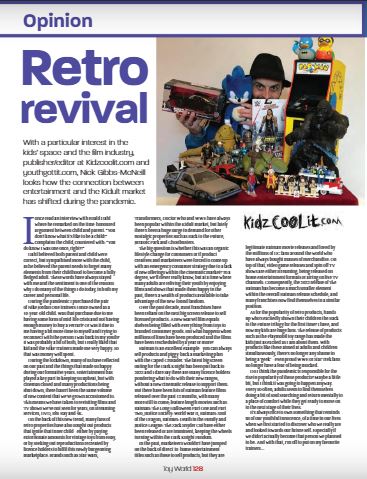 Nick notes that during the lockdown, many of us have reflected on our past and the things that made us happy during our formative years. Entertainment has played a key part in keeping us upbeat, but with cinemas closed and many productions being shut down, there hasn’t been the same volume of new content that we’ve grown accustomed to. This means we have taken to revisiting films and TV shows we’ve not seen for years, on streaming services, DVD, Blu-Ray and 4K.

On the back of this new trend, many fans of retro properties have also sought out products that ignite that inner child, and Nick explores whether this was an organic lifestyle change for consumers or if product creatives and marketeers were forced to come up with an emergency consumer strategy due to a lack of new offerings within the cinematic market.

He goes on to describe his delight at being able to share properties such as Back to the Future with this family. “With products like these aimed at adults and children simultaneously, there’s no longer any shame in being a ‘geek’ – even proud WWE or Star Trek fans no longer have a fear of being mocked,” he writes.

To read the full article, which appeared in the June issue of Toy World, click here.