Ahead of the launch of Jurassic World Dominion this summer, Toy World takes an in depth look at the world-leading global franchise. 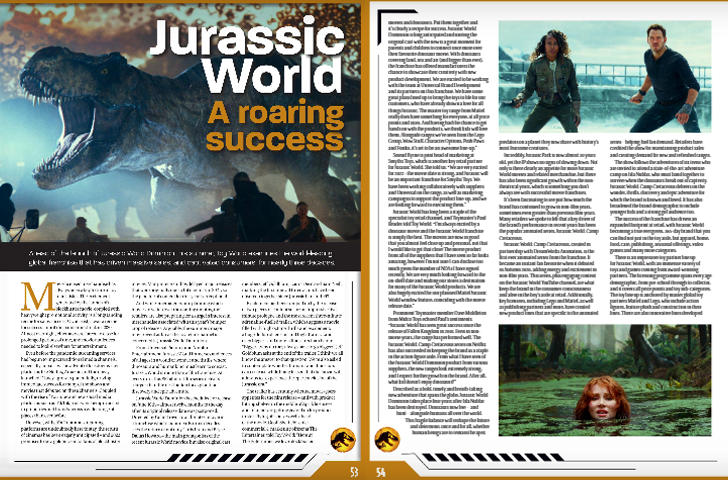 Movie licensed merchandise has always been a key fixture in toy retail aisles. The excitement generated by the launch of a blockbuster movie, coupled with heavyweight promotional activity, is a longstanding recipe for sales success. Or, at least, it was until the pandemic struck in 2020. Almost overnight, cinemas were forced to close, and movie audiences needed to look elsewhere for entertainment.

However, while YouTube and streaming platforms are undoubtedly here to stay, the return of cinemas has been eagerly anticipated – and 2022 promises to be a golden year for fans of blockbuster movies. And while cinema-goers are planning which movies to watch over the coming months, toy retailers are also preparing for a surge in interest in merchandise associated with this year’s bumper crop of releases. Arguably, the summer’s major movie event as far as the toy retail channel is concerned is Jurassic World Dominion.

Jurassic World has driven massive sales, and captivated consumers, for nearly three decades. From Universal Pictures and Amblin Entertainment, Jurassic World immerses audiences of all ages in a world of wonder and thrills, where dinosaurs and humankind must learn to coexist. More than a film franchise, at every turn, this $5b+ film series delivers a larger-than-life destination for exploration, discovery and epic adventure.

With product hitting shelves in the middle of April, licensees and retailers are getting geared up for sales to kick in well ahead of the movie.

“Here at The Entertainer, we love blockbuster movies and dinosaurs,” Geoff Sheffield, chief commercial & marketing officer, told Toy World, echoing the sentiments of retailers globally. “Put them together and it’s clearly a recipe for success. We have some great plans lined up to bring the toys to life for our customers, who have already shown a love for all things Jurassic. The master toy range from Mattel really does have something for everyone, at all price points and sizes. Alongside ranges we’ve seen from the Lego Group, Wow Stuff, Character Options, Posh Paws and Funko, it’s set to be an awesome line-up.”

It’s been fascinating to see just how much the brand has continued to grow in non-film years. Many retailers we spoke to felt that a key driver of the brand’s performance in recent years has been the popular animated series, Jurassic World: Camp Cretaceous. Key licensees, including Lego and Mattel, have created new product lines that are specific to the animated series – helping fuel fan demand.

The success of the franchise has driven an expanded footprint at retail, with Jurassic World becoming a true evergreen, 365-day brand that you can find not just in the toy aisle, but in apparel, home, food, care, publishing, seasonal offerings, video games and many more categories.

To find out more about the franchise and the immense variety of toys and games on the way from award-winning partners, see the feature in the April edition of Toy World here.