Innovation means many school essentials are now ideal to range into toy outlets; Sam Giltrow finds out how the Stationery sector is being made more fun. 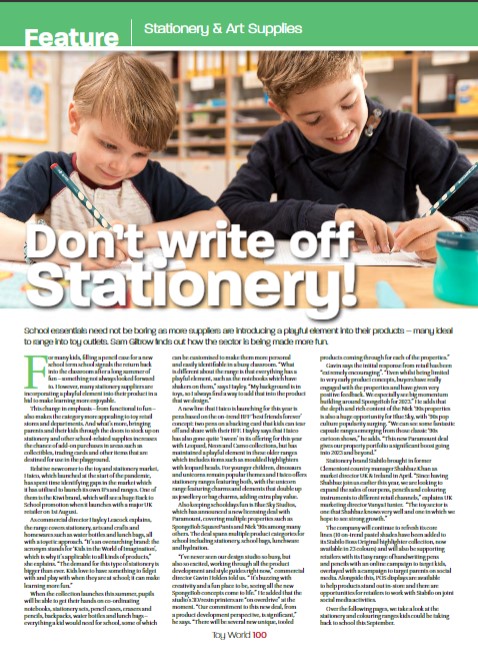 For many kids, filling a pencil case for a new school term school signals the return back into the classroom after a long summer of fun – something not always looked forward to. However, many stationery suppliers are incorporating a playful element into their product in a bid to make learning more enjoyable.

This change in emphasis – from functional to fun – also makes the category more appealing to toy retail stores and departments. And what’s more, bringing parents and their kids through the doors to stock up on stationery and other school-related supplies increases the chance of add-on purchases in areas such as collectibles, trading cards and other items that are destined for use in the playground.

We hear from Haico, which has spent time identifying gaps in the market that it has utilised to launch its own IPs and ranges; Blue Sky Studios, which has announced a new licensing deal with Paramount, covering multiple properties such as SpongeBob SquarePants and Nick ‘90s among many others; Stabilo, which is looking to expand the sales of its pens, pencils and colouring instruments to different retail channels, and find out which stationery and colouring ranges kids could be taking back to school this September.

To read the full article, which appeared in the July edition of Toy World, click here.