Toy World took a look at Aardman’s latest property and spoke to Rob Goodchild about the licensing opportunities Lloyd of the Flies offers. 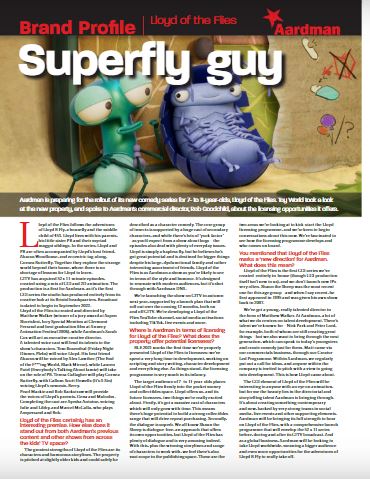 Lloyd of the Flies follows the adventures of Lloyd B Fly, a housefly who lives with his parents, his little sister PB and their myriad maggot siblings. In the series, Lloyd and PB are often accompanied by Lloyd’s best friend, Abacus Woodlouse, and eccentric tag-along, Cornea Butterfly. Together they explore the strange world beyond their home, where there is no shortage of lessons for Lloyd to learn.

CITV has acquired 52 x 11-minute episodes, created using a mix of CGI and 2D animation. The production is a first for Aardman, as it’s the first CGI series the studio has produced entirely from its creative hub at its Bristol headquarters. Broadcast is slated to begin in September 2022.

Rob discussed how the property stands out from both Aardman’s previous content and other shows from across the kids’ TV space.
“Lloyd of the Flies is as Aardman a show as you’re likely to see in terms of the style and humour.,” he explained. “It’s designed to resonate with modern audiences, but it’s shot through with Aardman DNA.”

The show will debut on CITV in autumn next year, supported by a launch plan that will roll out over the coming 12 months, both on and off CITV. A Lloyd of the Flies YouTube channel, social media activations including TikTok, live events and more will accompany the series.

As things stand, the licensing programme is very much in its infancy, but Aardman is looking forward to presenting Lloyd to licensees at BLE 2021.

“The target audience of 7- to 11-year-olds places Lloyd of the Flies firmly into the pocket money and collectibles space,” Rob continued. “It’s got a massive cast of characters which will only grow with time. This means there’s huge potential to build a strong range that will drive repeat purchasing. Secondly, the dialogue is superb. With this, plus the winning storylines and range of characters to work with, we feel there’s also vast scope in the publishing space. We’re fascinated to see how the licensing programme develops and who comes on board.”

To find out more, read the full article, which appeared in the November edition of Toy World, here.