Ahead of the Independent Toy & Gift Show, Sam Giltrow spoke to members of Play-room, the toy division of AIS, to find out how their toy offering is bringing in customers. 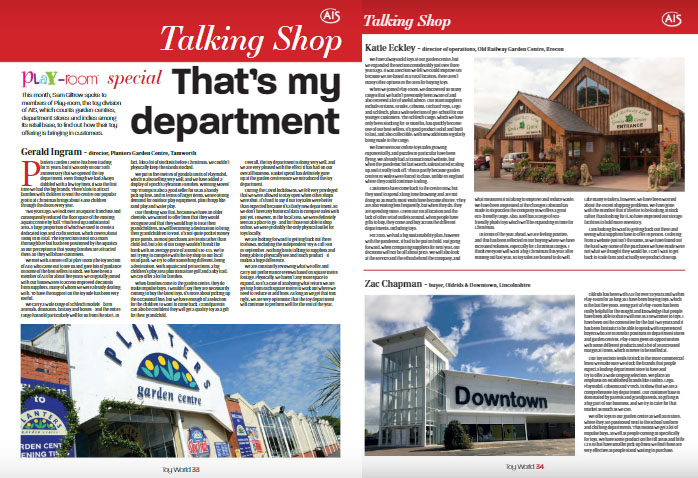 Play-room counts garden centres, department stores and indies among its retail base and this month, we explored how selected toy departments contribute to the success of the overall retail business.

Gerald Ingram, director at Planters Garden Centre, Tamworth, told us that although the garden centre had been trading for 31 years, it was only on the company’s 30th anniversary that it opened the toy department. “There’s lots to attract families with children to visit the centre,” he explained, “Our popular grotto at Christmas brings about 4,000 children through the doors every year.”

Gerald and his team met with Aimee Hill at Play-room, who gave guidance on the best sellers to stock. Having now been a member of AIS for about five years, Gerald says that the support has been extremely useful.

Katie Eckley, director of operations at the Old Railway Line Garden Centre, Brecon, shared how she expanded the toy section considerably just over three years ago, and also found support from AIS invaluable. “When we joined Play-room, we discovered so many ranges that we hadn’t previously been aware of and also received a lot of useful advice,” she told us.

Zac Chapman, buyer at Oldrids & Downtown, Lincolnshire, was encouraged to join Play-room having seen the benefits of the depoartment store’s long-standing AIS membership.

“Being part of Play-room has been really helpful for the insight and knowledge that people have been able to share with me as a newcomer to toys,” he said. “Play-room gives us opportunities with some different products and a bit of an increased margin at times, which is never to be sniffed at.”

Zac has been working with suppliers to get stock in early, to mitigate shortages later on due to shipping issues. “We are confident that as long as we can get the right stock in, we will have a great year,” he concludes.

With more on which ranges have proved the most popular and how these are targeted to each retailer’s particlular clientele, read the full article, which appeared in the August issue of Toy World here.