As part of this month’s Talking Shop, Rachael Simpson-Jones spoke to Alex Woolfstein and Emma Carden of BargainMax to find out how the business has responded to the pandemic. 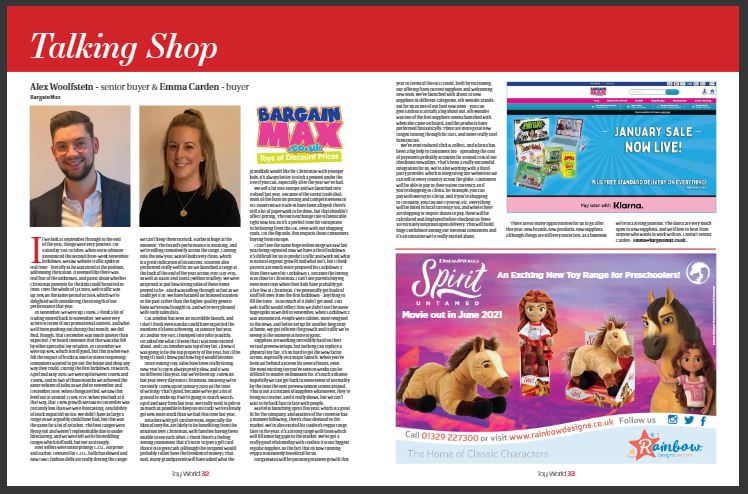 Alex, senior buyer, and Emma, buyer, told us that, looking at September through to the end of the year, things were very positive. When the second three-week November lockdown was announced, they saw website traffic spike in real time – literally as Boris was addressing the nation. “It seemed like there was real fear of the unknown, and panic about whether Christmas presents for the kids could be sorted in time,” said Alex.

The buying duo described how they have observed fluctuations in trading patterns over the year, as different pandemic-related restrictions came into effect – or were lifted. They also discussed how sales were affected by availability of stock, with the best ranges that were flying out not always replenishable.

Emma revealed the BargainMax best-sellers, which include CoComelon products. Alex told us: “At London Toy Fair, CoComelon was top of my list. I knew it was going to be the top property of the year, but I’d be lying if I said I knew just how big it would become.”

Despite suppliers working incredibly hard on their virtual preview setups, Alex and Emma both agree that nothing can replace a physical toy fair. “When you’ve been behind a screen for several hours, even the most exciting toy you’ve seen in weeks can be difficult to muster enthusiasm for,” explained Alex. “Suppliers are being so creative, and it really shows, but we can’t wait to be back face to face with people.”

We heard which ranges BargainMax believes are set for success in 2021, and how the online retailer will be pursuing massive growth this year in terms of the company’s SKU count, both by increasing its offering from current suppliers and welcoming new ones.

“There are so many opportunities for us to go after this year: new brands, new products, new suppliers,” enthused Alex. “Although things are still very uncertain, as a business we’re in a strong position. The doors are very much open to new suppliers, and we’d love to hear from anyone who wants to work with us.”