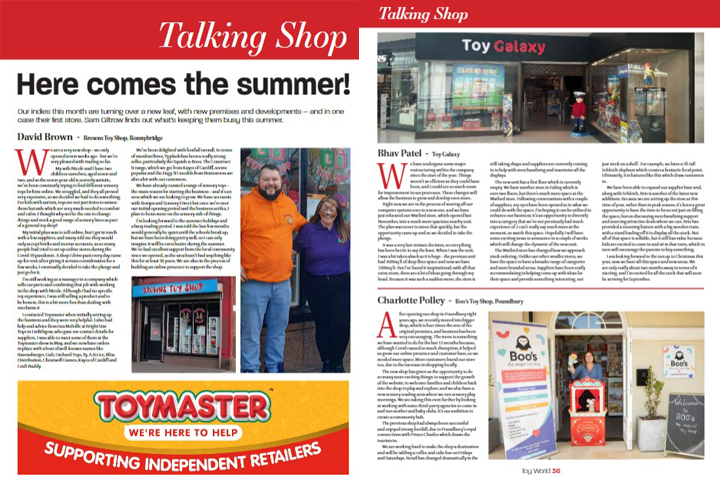 David Brown from Browns Toy Shop, Bonnybridge hasn’t been open long but tells us he is very pleased with trading so far. Having searched for suitable toys for his severely autistic seven-year-old son, David and his wife decided to set up their own business. “I thought why not be the one to change things and stock a good range of sensory lines as part of a general toy shop?”

With help from Toymaster and an exisiting local retailer, David and Nicole were able to open a host of supplier accounts for the new store and have already curated a range of sensory toys. “This was the main reason for starting the business – and it’s an area which we are looking to grow,” says David. “Once we’re over our initial opening period and the business settles, I plan to focus more on the sensory side of things.”

Meanwhile, Toy Galaxy has undergone some major restructuring since the start of the year, as Bhav Patel explains. “Things weren’t as efficient as they could have been, and I could see so much room for improvement in our processes. These changes will allow the business to grow and develop even more.”

Alongside moving computer systems over to a new one, the company has just relocated its Watford store into a much more spacious nearby unit. “I’ve found it inspirational; with all that extra room, there are a lot of ideas going through my head,” Bhav tells us. “Watch this space.”

Toy Galaxy has been able to expand its supplier base and, because the team has been setting up the store at this time of year, rather than in peak season, Bhav says he’s had the time to focus not just on filling the space, but on discussing merchandising support and sourcing attractive deals.

Charlotte Polley of Boo’s Toy Shop, Poundbury has also recently moved into a bigger shop and says business has been very encouraging. “Although Covid caused so much disruption, it helped us grow our online presence and customer base,” Charlotte says. “More customers found our store, due to the increase in shopping locally. The new shop has given us the opportunity to do so many more exciting things.”

At Toy Barnhaus, Mark Buschhaus and Stephen Barnes’s wish for a sustained period of warm, summer weather to boost sales of outdoor lines seems to have been granted. They tell us that over the May half term and Platinum Jubilee weekend, business held up extremely positively. “The forecast is looking promising, so it’s shades on and fingers crossed we get some heat,” they conclude.

Mark and Stephen’s Indie Viewpoint column, and the rest of our Talking Shop feature from the July edition of Toy World, go into much more detail on our featured retailers and what is selling well for them. To read, click here.