Exclusive: The how behind the Wow! at Wow! Stuff

Rachael Simpson- Jones spoke to Wow! Stuff CEO Richard North about the company’s plans for the second half of 2021, and his often unorthodox approach to business. 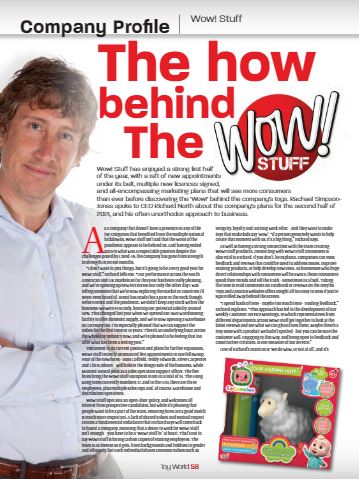 Wow! Stuff has enjoyed a strong first half of the year, with a raft of new appointments under its belt, multiple new licences signed, and all-encompassing marketing plans that will see more consumers than ever before discovering the ‘Wow!’ behind the company’s toys.

Having ended 2020 in what was a respectable position despite the challenges posed by Covid-19, the company has gone from strength to strength in recent months.

“I don’t want to jinx things, but it’s going to be a very good year for Wow! Stuff,” says Richard. “Our performance across the North American and UK markets so far this year has been really pleasing, and we’re opening up new territories too. There’s an underlying buzz across the whole toy industry now, and we’re pleased to be feeling that too after what has been a testing year.”

Testament to its current position and plans for further expansion, Wow! Stuff recently announced five appointments in one fell swoop. Richard spoke candidly about the importance of finding staff who “have to be a Wow! Stuff’er at heart,” in his words.  Every member of the team shares common values such as integrity, loyalty and a strong work ethic – and they want to make toys that make kids say ‘Wow’.

Richard went on to discuss how he places equal measure on connecting with Wow! Stuff consumers and how the team evaluates all feedback on the company’s products. This passion for ‘the Wow’ naturally extends to product development. “We do Wow, or not at all”, says Richard, who tells us more about the innovative, interactive, technologically-driven products for which Wow! Stuff has become renowned, with launch after launch demonstrating the company’s all or nothing approach to making toys.

With more on the working partnerships that Wow! Stuff enjoys, for example with  marketing agency KidsKnowBest as well as retailers such as Smyths Toys Superstores, plus news of the company’s latest marketing efforts focused on driving traffic to retailers – and yet to be revealed major experiential activations, Richard also spoke enthusiastically about the latest upcoming launches. “It’s a full slate this year,” he explains, “with lots of licensed brands. This is going to be a year of proving to people that Wow! Stuff doesn’t just revolve around three or four halo products per brand.”

To read the full interview, which appeared in the June issue of Toy World, click here.