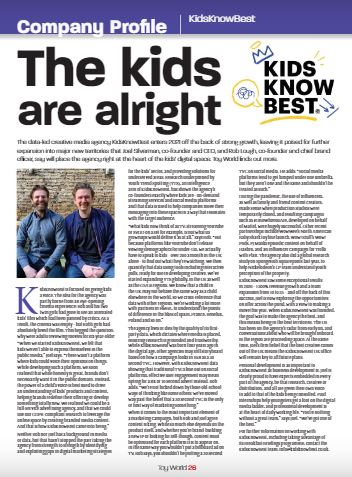 KidsKnowBest enters 2021 off the back of strong growth, leaving it poised for further expansion into major new territories that Joel Silverman and Rob Lough say will place the agency right at the heart of the kids’ digital space.

“When we started KidsKnowBest, we felt that kids weren’t able to express themselves in the public media,” Joel told us. “There wasn’t a platform where kids could voice their opinions on things. We soon realised that while honesty is great, brands don’t necessarily want it in the public domain. Instead, the power of a child’s voice is best used to drive an understanding of kids’ products and content, helping brands redefine their offering or develop something totally new. We realised we could be a full-service advertising agency, and that we could use our GDPR-compliant research to leverage the online space by creating branded media content. And that is how KidsKnowBest came into being.”

The agency lives or dies by the quality of its firstparty data, which dictates where media is placed, ensuring research is grounded and trustworthy. Rob explained: “We’re not locked down by old-school ways of thinking like some others; we’ve moved way past the belief that a 30 second TVC is the only or best way of marketing something.”

Joel and Rob talked further about the agency’s data, and the campaigns it has undertaken on behalf of clients such as Mattel, WowWee, Wow! Stuff, Hasbro, Flair and Nickelodeon.

In 2020, KidsKnowBest saw +300% revenue growth and the team expand from 10 to 35. Joel also discussed exploring further international opportunities, and how personal development is a key focus for the staff at KidsKnowBest, where professional development is at the heart of daily working life. “You’re nothing without a great team,” said Joel. “We’ve got one of the best.”

To read the full article, which appeared in the May issue of Toy World, click here.