Having benefited from a major boost since the start of the pandemic, the kidult sector is now a strong growth category for the toy industry. 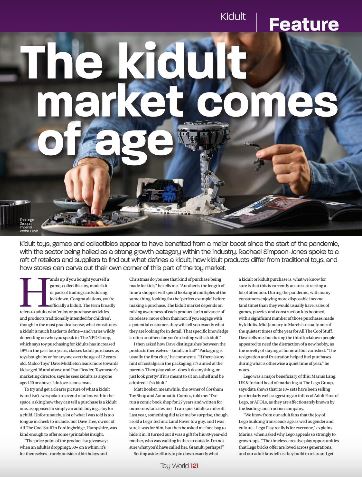 For our special kidult feature, Rachael Simpson-Jones spoke to a raft of retailers and suppliers to find out what defines a kidult, how kidult products differ from traditional toys, and how stores can carve out their own corner of this part of the toy market.

During the pandemic, with many consumers enjoying more disposable income (and time) than they would usually have, sales of games, puzzles and construction kits boomed, with a significant number of those purchases made by kidults. During the third lockdown people appeared to need the distraction of a new hobby, as the novelty of staying at home all but vanished.

The feature examines the ranges which benefited from such sales, with further comment from retailers specialising in the area, and more from companies whose ranges cater well to this burgeoning market sector.

Recent data and retail feedback suggests there’s clearly plenty of desire to buy in the kidult marketplace, and with that comes plenty of opportunities for toy retailers to either expand their existing ranges or explore the category for the first time.

Dave Middleton of Midco Toys summed up the market for us: “When I was 16 or 17, buying Star Wars figures, I didn’t tell anyone because I thought I’d get beaten up. Now though, 16-year-old me would probably be considered cool. People have got to stop thinking this is a niche market for weirdos; it’s not. In America, this stuff is everywhere – Target, Walmart, Barnes and Noble – and it should be everywhere here too.”

For the full article, which appeared in the June issue of Toy World, click here. In the pages following the article, Toy World also brings details on the latest kidult ranges hitting shelves this year.