Exclusive: The latest from HoloToyz

Husband and-wife team Declan Fahy and Kate Scott share why they believe tech has a place in play, what new licensing deals bring to the table, and their plans for the future of HoloToyz. 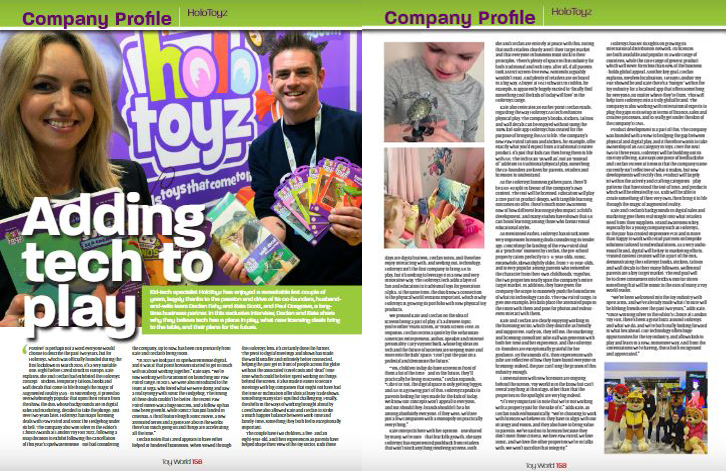 ‘Positive’ is perhaps not a word everyone would choose to describe the past two years, but for HoloToyz, which was officially founded during the first lockdown in March 2020, it’s a very suitable one. Right before Covid struck in Europe, Kate explains, she and Declan had exhibited the HoloToyz concept – stickers, temporary tattoos, books and wall decals that come to life through the magic of Augmented Reality (AR) – in Nuremberg. It proved so overwhelmingly popular that upon their return from the show, the duo, whose backgrounds are in digital sales and marketing, decided to take the plunge.

Just over two years later, HoloToyz has major licensing deals with Paw Patrol and Sonic the Hedgehog under its belt., and won Silver in the Editor’s Choice Awards at London Toy Fair 2022.

“Like it or not, the digital space is only getting bigger, and AR is a growing part of this,” says Declan. “HoloToyz speaks to parents looking for toys made for the kids of today. We know our concepts won’t appeal to everyone, and nor should they: brands shouldn’t be a hit among absolutely everyone.”

Kate says HoloToyz has experienced pushback from retailers that won’t stock anything involving screens, but believes there’s plenty of space in the toy industry for both traditional and tech toys.

The company’s books, stickers, tattoos and wall decals can be enjoyed without using the 100% kid-safe app HoloToyz has created for the purpose of bringing the AR to life. The new Paw Patrol tattoos and stickers, for example, offer exactly what you’d expect from a traditional creative product: it’s just that kids can then bring them to life with AR. The tech is an ‘as well as’, not an ‘instead of’ addition to traditional physical play, something the co-founders are keen for parents, retailers and licensors to understand.

Since winning Silver in the Editor’s Choice at London Toy Fair, there’s been a great buzz around HoloToyz, says the couple, who are both really looking forward to what lies ahead. “Our technology offers huge opportunities for the toy industry, and allows kids to play and learn in a new, immersive way. And from the conversations we’re having, this is both recognised and appreciated.”

To find out more about HoloToyz’ growing distribution, its existing licensed and generic product and future product development, read the full article, which appeared in the May edition of Toy World, here.