Exclusive: TMI? No such thing….

Joel Silverman, co-founder and CEO of data-led ad agency KidsKnowBest talks to Toy World’s Sam Giltrow about how the company has been transforming children’s views and viewing habits into crucial information for toy companies. 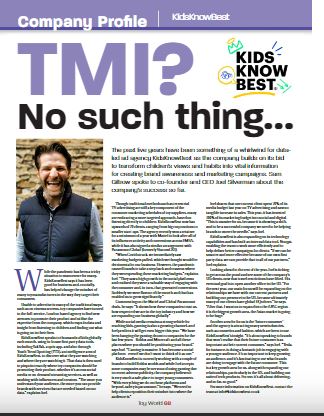 Launched five years ago, London-based KidsKnowBest has grown to be a respected full-service agency which is slowly but surely changing the mindset of companies trying to find the best avenue for their marketing campaigns.

Many now accept that terrestrial TV routes are not always the best route and Joel and his team are able to highlight to clients the many more effective ways to target their audience.

Joel explains how KidsKnowBest speaks to thousands of kids each month using in-house data tools, to discover what they are watching and where they are watching it. For instance, while social media remains a strong vehicle for reaching kids, gaming is also a growing channel and Joel predicts this will be even bigger this year.

He also shares an example of how the company helped one client increase its sales by moving from traditional TV advertising to investing100% of its marketing budget into social and digital.

“This is massive for us, because it is showing a shift, and to be a successful company, we need to be helping brands to move the needle,” Joel says.

Expanding relationships with existing clients is the main area of focus for KidKnowBest in 2022 and Joel tells Toy World of his plans to get over to the US – something which has been hampered by the pandemic – to build the company’s presence there.

He also has bigger plans to take the KidsKnowBest brand even further afield. “I want to expand into the APAC region – it is the biggest growth area and the Asian market is going to be huge,” he says.

To read the full interview in the April issue, click here.