Rachael Simpson-Jones spoke to Darran Garnham to find out more about Piñata Smashlings and how the Toikido team is ensuring it hits all the right notes with kids. 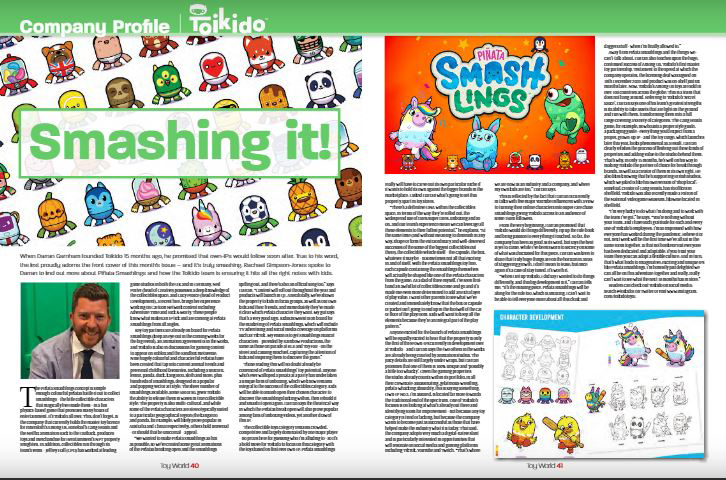 When Darran Garnham founded Toikido 15 months ago, he promised that own-IPs would follow soon after. True to his word, the first proudly adorns the front cover of this month’s Toy World – and it’s truly smashing.

The Piñata Smashlings concept is simple enough; colourful piñatas battle it out to collect Smashlings – little collectible characters that magically live inside them – in a fun physics-based game that promises many hours of entertainment.

Toikido currently holds the master toy licence for Innersloth’s Among Us, Boneloaf’s Gang Beasts and the Netflix animation Back to the Outback, and produces toys and merchandise for Herotainment’s NFT property Smighties. Collectibles run through the team’s veins; these people know what makes an IP tick and are coming at Piñata Smashlings from all angles. Toikido’s Among Us toys are sold in over 100 countries across the globe and the Gang Beasts toy range launches later this year.

Key toy partners are already on board for Piñata Smashlings, an animation agreement is in the works, and Toikido is also in discussions for gaming content to appear on Roblox and the Sandbox metaverse. The sheer number of Smashlings available, some 500 or so, gives Toikido the ability to release them in waves in true collectible style.

“We wanted to make Piñata Smashlings as fun as possible, so we’ve created some great animations of the Piñatas breaking open and the Smashlings spilling out, and there’s also an official song too,” says Darran. “Content will roll out throughout the year and products will launch in Q1.”

Toikido is confident that Smashlings is destined for success in the collectible toys market. The property is only the first of three own-IPs currently in development at Toikido – with the two others already being courted by animation studios.

From the very beginning, Darran promised that Toikido would rip up the rule book and bring passion to everything it touched. So far, the company has been as good as its word, but says the best is yet to come.

“When I set up Toikido, I did say I wanted to do things differently,” Darran explains. “I can’t wait to be able to tell everyone more about all this cloak and daggers stuff – when I’m finally allowed to.”

To find out more, read the full article, which appeared in the February edition of Toy World, here.