Before ‘non-essential’ retailers are forced to close for a month from Thursday this week, toy stores tell Toy World of record levels of demand that could translate into weeks’ worth of sales. 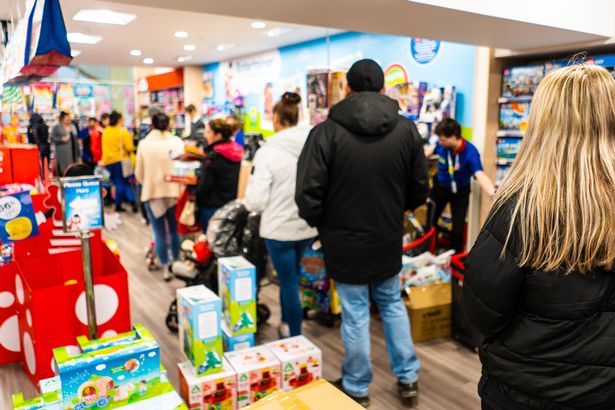 Rapidly rising infections and hospitalisations have necessitated a second lockdown in England, which comes into force for four weeks from Thursday 5th November. The new measures will force the closure of all ‘non-essential’ retailers, with the timing leaving many retailers frustrated at the potential impact on the retail industry during the golden quarter.

Toytown’s Alan Simpson, who recently spoke to Toy World about the opening of his newest store in Uxbridge, argues that while most business people would have said that the lockdown was inevitable, it should have happened sooner. “Had that happened, we would have been looking at a two-week, possibly three-week period, but the delay has not only prolonged the agony, it has also made it more damaging for the economy,” he told us. “However, it is what it is, and we just have to knuckle down and focus on damage limitation. We have 12 stores affected and will consider ramping up our online offering and use click & collect where feasible.”

There are concerns that the lockdown measures implemented will be cancelled out by the decision to keep nurseries, schools, colleges and universities open. Amanda Alexander, owner of Giddy Goat Toys, told us: “As a parent, I’m pleased that they are keeping schools open – I have a child sitting A-Levels this year and another in Year 10 – but as a retailer it seems crazy to keep schools and universities open, where large numbers of kids mixing have got to be contributing to the rising rates. Here in Manchester, we’ve been in local lockdown since the end of July, yet in September there was a massive increase in infections as schools re-opened and 100,000 students rocked up. They would have been better off closing everything down the week before half term and shutting everything for two weeks, rather than closing down retailers and the hospitality industry for the whole of November. I’m just glad I’m part of a supportive industry and wish all my fellow toy sellers all the best for the next few weeks and months.”

Amanda also told Toy World of her concerns regarding the postal and courier system potentially being overwhelmed, sentiments echoed by others within the industry. The British Retail Consortium’s ‘Shop early, start wrapping, enjoy Christmas’ campaign was designed to prevent the usual retail rush seen through late November and December, both in stores and online, and The Entertainer has also been pushing the ‘shop early’ message hard amidst fears that delivery services won’t be able to cope with demand this year. Fears have also arisen that a rush on physical stores when the restrictions are lifted will leave retailers facing the challenge of catering to consumers while maintaining social distancing and the safety of both shoppers and staff.

The implementation of the lockdown has its upsides, however, with the Thursday start providing consumers time in which to do to last-minute lockdown shopping. And shop they have; when contacted, several retailers told Toy World they were dealing with too many customers to be interviewed. Gary Grant, CEO and founder of The Entertainer, took a breather to tell us that, despite the chain’s Welsh stores being closed, and its Scottish locations performing as usual, the business took twice the number of sales by 2pm on Monday than it did this day last year across its entire store portfolio. “Across Saturday night and Sunday, our online sales were up +400%,” Gary explained. “We’ve come in to find probably the biggest number of orders we’ve ever faced on a Monday morning, even following a Black Friday weekend, so the elves are working really hard  at the moment, packing and shipping those cartons. In-store traffic is massively up too, and our click & collect service, which wasn’t available to us in April and May, has also seen demand skyrocket. Whichever way you look at it, this is a mammoth week for us; the three days of sales before lockdown kicks in could potentially translate into weeks worth of sales in a ‘normal’ year. Web sales will also continue to run at a high level for the whole of the month, and we have some dramatic plans to increase the capacity of our click & collect service. Add in the over-performance this week, and lockdown may not end up being the big problem it could have been.”

Stephen Barnes of Toy Barnhaus reports similar shopping trends, telling Toy World: “We spent Sunday putting a battle plan into action, looking at what we can do from our shops on ring and reserve and home delivery. Meanwhile, our shops went mad; sales were more than we took on the Sunday of Black Friday weekend last year, and trade so far today [Monday] has been very strong, so we are focusing on maximising what we can until close of trade on Wednesday.”

The biggest worry for Stephen and his business partner Mark Buschaus is the lockdown continuing beyond 2nd December. November is the retailer’s second busiest month, but December is worth more than double November, and the pair say it would be ‘a bitter pill’ to be closed throughout the period. They add: “For now, all we can focus on is staying positive. We will influence what we can, generate sales and serve our customers in any way we can.”

While news of the lockdown won’t have been welcomed by anyone from a retail perspective, it certainly seems as though British shoppers are keen to support their local stores while they can. In response, The Entertainer has announced extended opening hours until Wednesday evening; stores will be open until 7pm or 8pm, depending on their location. “If the message wasn’t getting through about shopping early before, it is now,” says Gary. “I’d be very surprised if there is a non-essential retailer in the country right now that is having a bad day. Three very strong days will provide substantially more sales than in any other year, so having those days to max out trade in-store will have been enormously helpful for us all.”