Previously known as Marbel Ltd, Toynamics UK & Ireland will be acting as an exclusive multi-brand distributor for ranges including Hape, Nebulous Stars and Nanoblocks. 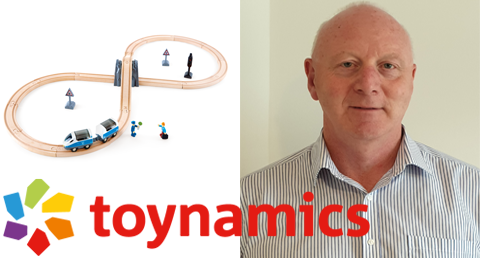 Marbel Ltd, a wholly owned subsidiary of the Hape group, announced a significant rebrand for the company now known as Toynamics UK & Ireland. The rebrand, which is accompanied by a new office, new team and a purpose-built showroom, offers retail partners plenty to look forward to.

It’s fitting that David should be overseeing such a dramatic overhaul of the company, having only joined Toynamics from DKL in July 2019. Since then, it’s been all hands to the pump; light, glass-partitioned offices, including a new showroom, have been secured in Kibworth Harcourt, Leicestershire, a central location which will allow the company to more easily serve its UK customers. An experienced and proactive new team has also been appointed.

Hape will be a major focus for Toynamics moving forward, especially its extensive Railway range. The company has tapped into consumer appetite for in-store theatre and fun shopping experiences by investing in a stunning range of POS shop-in-shop displays, which will be available to view at London Toy Fair (Stand B50).

Hape’s Baby Einstein range, the result of a 50% partnership with Kids II a couple of years ago, is another success story that David is keen to highlight; 20,000 units of its Magic Touch Piano, each of which retails for around £30, sold in 2019. Off the back of this item’s popularity, 12 new items will soon be hitting shelves, marking a major step up for the brand.

One of Toynamics’ biggest focuses for 2020 is increasing its representation in toy stores across the UK; encouraging retailers stocking the biggest names like Lego and Playmobil to buy into the company’s brands and ethos. Although David is keen to support online retail, his heart lies with bricks & mortar, and he firmly believes that, ultimately, consumers will return in their droves to physical stores.

David commented: “I’m aware that this venture lives or dies with me, but I’ve been given complete freedom to do it my way – and there is so much that can be done. We’ve very much been a sleeping giant, but now we’re waking up.”

Read the full article in our bumper January issue here.