Toy World caught up with Ashley Holman of ToyTopic to hear about his brand new venture and why the time was right to launch a new toy company. 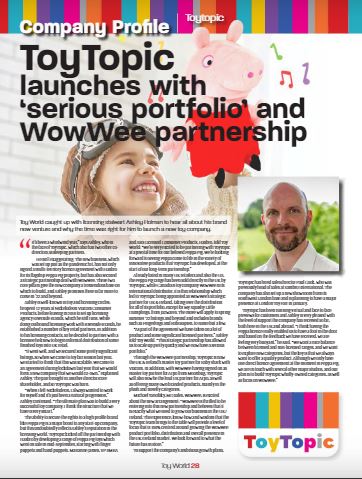 “It’s been a whirlwind year,” Ashley told us. He isn’t exaggerating. The new business, which was set up just as the pandemic hit, has not only signed a multi-territory licence agreement with Hasbro for its flagship Peppa Pig property, but has also secured a strategic partnership deal with WowWee. These two core pillars give the new company a tremendous base on which to build, and Ashley promises there is far more to come in ’22 and beyond.

Ashley is well-known in toy and licensing circles: he spent 12 years at Nickelodeon Viacom Consumer Products, before leaving in 2018 to set up licensing agency Riverside Brands, which he still runs. While doing outbound licensing work with Riverside Brands, he established a number of key retail partners, in addition to his licensing contacts, so he decided to partner with a licensee he knew to begin informal distribution of some finished toys into UK retail.

“It went well, and we secured some pretty significant listings, so when we came to toy fair season last year, we started to think that this was scalable. We came to an agreement during lockdown last year that we would form a new company that we would co-own,” explained Ashley. The pair brought in another director/core shareholder, and so ToyTopic was born.

Ashley told us more about the brands that make up the company’s portfolio so far, including a partnership with Hasbro for Peppa Pig and distribution for the majority of WowWee’s products, two deals which have allowed the company to scale up rapidly. “We want a nice balance between licensed and non-licensed ranges, and we want to explore new categories, but the key is that we always want to offer a quality product,” he explained.

With more on how ToyTopic plans to develop in the future, read the full article, which appears in the October edition of Toy World here.