John Baulch caught up with NBC Universal Brand Development’s vice president EMEA to reflect on the events of the past 18 months and look ahead to 2022. 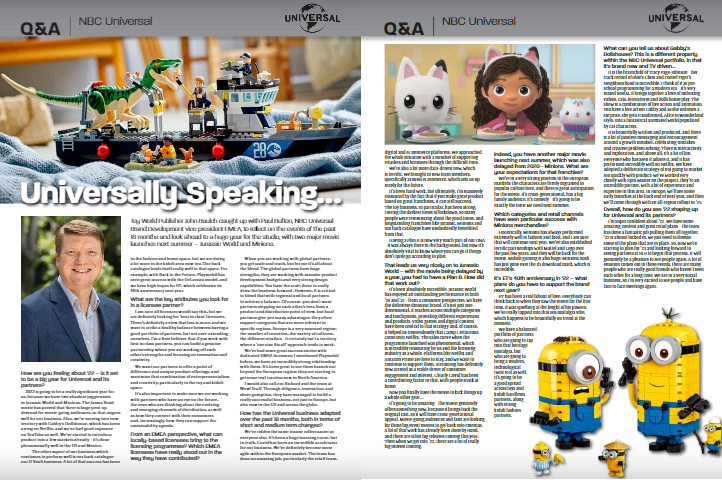 Next year is going to be a ‘really significant’ one for NBCUniversal, according to Paul Bufton, with not one but two major movie launches lined up for summer 2022 – Jurassic World and Minions. The reception to the latest instalment in the James Bond franchise has shown the studio how much demand is out there for new movie releases, which it says augurs well for its business. At the same time, Gabby’s Dollhouse – currently available on Netflix and YouTube, has moved Universal into new, previously untapped areas, and product is performing well in the US and Mexico too.

“The other aspect of our business which continues to perform well is our back catalogue – our U Vault business,” adds Paul. “A lot of that success has been in the fashion and home space, but we are doing a lot more in the kidult area now too. Our back catalogue lends itself really well to that space. For example, with Back to the Future, Playmobil has seen great success with the DeLorean model, and we have high hopes for ET, which celebrates its 40th anniversary next year.”

As a leading licensor, Universal seeks out best-in-class partners that pave the way to building a genuine partnership in which both parties work off each other’s strengths, focusing on innovation and creativity. Paul explains that the studio wants its licensees to offer a point of difference and unique product offerings, and to ‘maximise that combination of entrepreneurialism and creativity’, particularly in the toy and kidult space.

“We’ve had some great success stories with dedicated EMEA licensees,” he says. “It’s been great to see Playmobil branch out beyond the European region; they are starting to get some real traction now in North America. I would also call out Richard and the team at Wow! Stuff. Through diligence, innovation, and sheer gumption, they have managed to build a really successful business, not just in Europe, but also now in the US and across the globe.”

Noting that the past 18 months have been no less challenging for Universal than they have been for other licensors, Paul is nonetheless hugely positive about the year ahead. The final instalment in the Jurassic World franchise, Jurassic World: Dominion, is highly-anticipated among cinema-goers: the film brings back the original cast, offering cross-generational appeal among audiences, and it’s delayed release has only fuelled excitement among fans. Minions, too, was delayed by the pandemic, but will arrive in cinemas for summer, supported by toys from the likes of Lego and Mattel.

To find out more about Jurassic World, Minions, Gabby’s Dollhouse, ET’s landmark 40th anniversary and what else 2022 has in store from Universal, read the full interview, which was published in the November issue of Toy World, by clicking here.