The tabletop game creator acquired Happy Salmon in July, and has now relaunched the game with an Exploding Kittens twist. 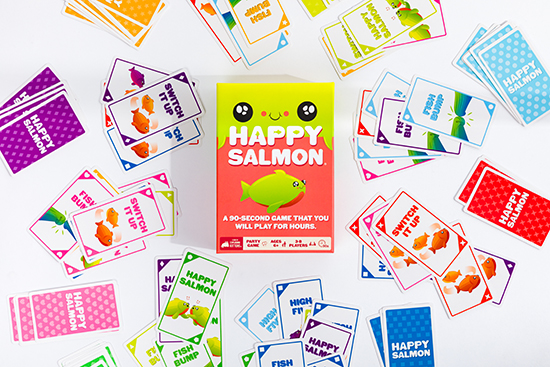 Designed by Quentin Weir and game developer Ken Gruhl, who has since joined the Exploding Kittens team as a senior game designer, the company has re-released Happy Salmon with an Exploding Kittens twist, featuring completely new artwork and an updated look.

“Happy Salmon is a perfect example of the types of games Exploding Kittens is looking to acquire,” said Elan Lee, co-creator and CEO of Exploding Kittens. “As a company that also started small, our goal is to continue working with other brilliant game  designers so we can take their creations to the next level.”

Voted one of the best games of the year by The Toy Insider, Happy Salmon is a 90-second game that everyone will play for hours. The loud, quick, and physical game sees players each given a deck of 12 cards. Once the game starts, players flip their decks over so that only one card is visible. All players shout and look for a partner calling for one of the matching actions – a fist bump, high five, switch it up, or the Happy Salmon (which is done by two players lightly slapping each other’s forearm at the same time). Players with a match perform that action together to discard that card, and the first player to get rid of all 12 cards wins.

“Happy Salmon can truly be played in 90 seconds from opening the box to finishing a round,” said Gruhl. “But you’ll find one game is not enough. It’s addictive and you’ll be playing over and over again.”

For more information on how to play, check out the below video.