Donations can still be made to the Fence Club Charity, details below. 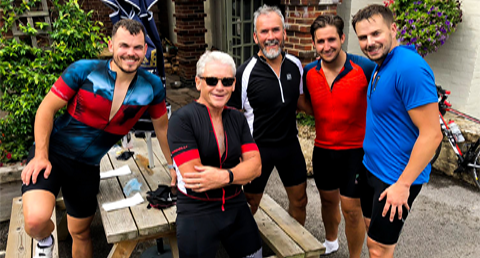 Former Fence Club chairman Steve Wells and fellow member Derek Scott, and their three cycling comrades James, Stuart and Dan are pleased to announce they have completed the 100 mile bike ride on Sunday 16th August, in memory of Les Nurse and Phil Green. The group miraculously managed to avoid any rain throughout, and managed to complete the journey in 6 hours 25 minutes, averaging 15.7 mph.

Steve commented: “I am pleased to say Derek, myself, and our three cycling comrades James, Stuart and Dan completed the 100 miles – actually, 100.51 miles – yesterday with a welcome lunch stop at 54 miles. No records broken but not too shabby.”

They have so far raised in excess of £11,100 via The Fence Club – though there are still some pledges to be banked and a few Just Giving donations to account for before a final total is reached.

The squad also ran a fundraising page with direct donations to The Alexander Divine Children’s Hospice, which has raised a grand total of £3,683.

“The final charity fundraising figures are astonishing and far exceed our initial expectations,” Steve added. “The generosity of Fence Club members, colleagues and friends and family never cease to amaze me. Even in these troubled times, people find it in their hearts to support children who are sick and less fortunate than ourselves. When I talked this idea through with Joe Kissane a little over three weeks ago I predicted we might get £3,000 – £4,000. I should have known better than to underestimate the generosity of Fence Club members.”

He added: “Les and Phil, I know you will be smiling down on us, thank you for the inspiration. You have once again raised a lot of money for the club. Massive, huge thanks go to everyone for supporting us and our fundraising effort. You have been extremely generous as always and we can’t thank you enough. You know that 100% of the fundraising goes to the charities, and you know that it will make a difference to the lives of many, many, children. Thank you all.”

Readers can still donate on the Just Giving page, which can be accessed here or by sending a cheque to John Athwal, Premier Decorations, Braintree Road, Ruislip, HA4 0EJ.