Flair adds Power Players to its 2020 line up 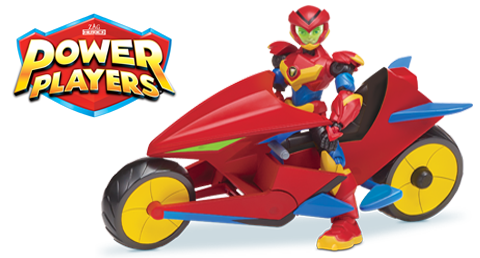 Power Players is an all-new action-comedy animation series created by Zag. This fun show shifts between the full-scale world of lead character, Axel and that of his friends and family. Debuting on Cartoon Network in February 2020, the mind-blowing visuals take hold when Axel crosses over into the world of his toy teammates and transforms into a living action figure for the biggest “small” adventures a kid could ever imagine.

Flair will launch the line to bring the adventures of the animated series to the playroom. A full range of action figures featuring all the main characters of the show will be joined by Super Feature figures with detailed articulation and electronic elements that will bring the toys to life. Vehicles will add to the choice, while accessories such as Axel’s Power Bandz and Sword will offer transformation and role play into the play pattern.

Emmanuelle Cadet, GP Flair’s head of marketing, commented: “We are delighted to be working with Playmates in bringing this collection to the UK. The series lends itself perfectly to toy play and with the detail that Playmates puts into its action figures, we have an excellent property to bring to the boy’s aisle.”

Power Players will launch in July with a full marketing programme behind it. For more information call Flair on 0208 643 0320 or email sales@flairplc.co.uk.