Prom Perfect series two and Hairdorables Longest Hair Ever are among the new launches set to hit shelves this autumn. 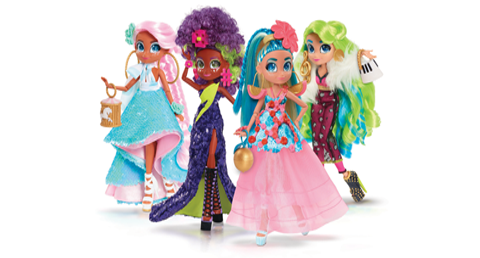 As Flair Just Play looks forward to another new season for the Hairdorables brand following successful spring activity, the company looks to solidify the strength of the brand with strong autumn/winter marketing plans.

With Hairmazing, the fashion doll arm of the Hairdorables brand, plans are afoot for the coming season to echo the brand’s social media success achieved in recent months. This collection launched in spring, bringing a stylish and highly detailed new Fashion doll to the dolls’ aisle. Style and sophistication is at the forefront of the new collection and has been echoed in months of social media activity.

The My Hairmazing Style Campaign saw high level teen instagrammers, micro-tween influencers and celebrity mums come together in a series of posts that showed their own interpretation of the Hairmazing fashion trends. Instagrammers included Patience’s Magical Toy Emporium, whose posts during March alone reached over 1.2m accounts.

Plans are now underway for the launch of series two, Prom Perfect, and once again the company looks to content creators to produce inspiring and engaging social content – including the latest craze, TikTok.

TV, VOD and YouTube advertising will also support Hairdorables Dolls, Longest Hair Ever and Hairmazing Prom Perfect throughout the key part of the year.

Charlotte Rodgers, marketing manager, Flair Just Play, commented: “We have a full programme planned for Hairdorables for the coming season, full of great new product launches all supported by strong TV, digital and influencer campaigns. We’ll be sharing these with our fans on PopJam and through the new Kennedy Publishing’s Hairdorables magazine. It’s a truly exciting time to be working on the brand and, despite the challenges of the past months, we are looking forward to seeing all the Hairdorables plans come to life.”