The retailer has also scrapped its catalogue, noting that “people carry the largest catalogue in the world in their pocket”. 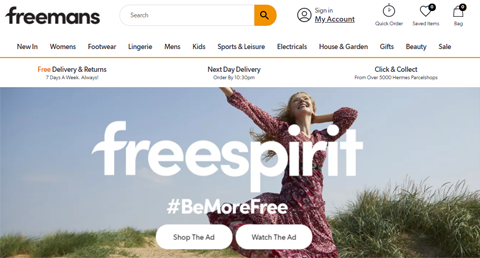 Freemans, a British online and catalogue clothing retailer headquartered in Bradford, England, has moved away from its current model in an effort to rebrand as a ‘vibrant digital department store’.

The retailer, which is owned by Otto, offers a range of products, predominantly clothing, footwear and homewares. It also offers toys from companies including MGA Entertainment, VTech, Hasbro, Mattel and ABGee.

As well as scrapping its printed catalogue, a new marketing campaign with the strapline #bemorefree has been rolled out across TV and digital, including social media. The campaign will raise awareness of the rebrand and drive traffic to Freemans’ refreshed mobile app and website.

“We’re incredibly excited about relaunching Freemans into the market at pace – we think there’s never been a better time for launching a vibrant digital department store backed by new product offer and a refreshed credit proposition,” said chief customer officer Richard Cristofoli. “The reality is people carry the largest catalogue in the world in their pocket. It’s not about removing all paper but refocusing it on inspirational, magazine-like content and then letting the m-site and app do the catalogue and content role.”