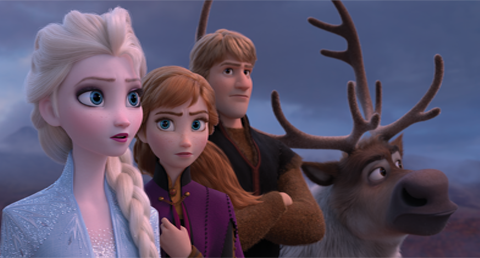 Frozen II has surpassed sales of its predecessor Frozen in its seventh week of release, becoming the highest-grossing animated film ever. Frozen II generated $11.3m in ticket sales in the US, to help reach a global gross of $1.33b. That puts the sequel ahead of the original film’s $1.28b global gross, Comscore reported.

Jennifer Lee and Chris Buck returned to direct the sequel, again following the adventures of Anna and Elsa (voiced by Idina Menzel and Kristen Bell) as they embark outside of their kingdom of Arendelle to uncover the secrets of their past. The voice cast also includes Jonathan Groff, Josh Gad, Sterling K. Brown and Evan Rachel Wood.

Despite the success of the franchise, Jennifer Lee has told media she was “very surprised” by the milestone.“I’m really excited. I think we’re always surprised,” she commented, on hearing the news.

Overall box office ticket sales rose about 7.2% from the same weekend last year, according to Comscore estimates, but the domestic 2020 box office overall may slide for a second year in a row. In 2019, ticket sales declined by almost $500m to about $11.4b.