A full-size Corgi box housing an Aston Martin DB5 will be on display to the public until October at Battersea Power Station. 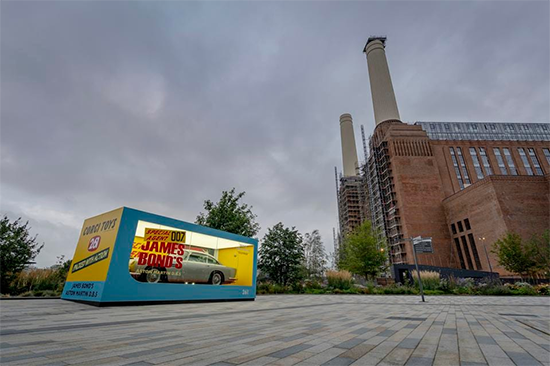 The full-size Corgi box housing an Aston Martin DB5 will be on display to the public until October.

Marking one month to go until the cinema release of No Time To Die, a life-sized Aston Martin DB5 Continuation Goldfinger Edition car, complete with working gadgets, has been put on public display in South West London, presented in a giant Corgi box. James Bond’s famous DB5 is just one of four Aston Martins featured in the upcoming movie.

Corgi first produced a model of the DB5 as featured in 1964’s Goldfinger, which retailed at 50p, and has produced replicas of most James Bond vehicles ever since. The DB5, designated Corgi model number 261 and produced in gold instead of Aston Martin’s Silver Birch finish, was last reissued in 2014 to celebrate 50 years since Goldfinger hit the big screen.

The DB5 Continuation is a newly-built, fully-functioning vehicle, taking 4,500 hours to complete and featuring a real bulletproof screen rising from the trunk, rotating licence plates, realistic front-facing machine guns, a smoke screen, navigation system and even a roof panel that can be removed to simulate the original’s ejector seat. Although not road legal and priced at over £2m plus taxes, all 25 of the limited edition models built by Aston Martin have been sold.

After many pandemic related postponements, No Time To Die is now slated for release on 30th September. The vehicle will be on display until that date.