Marvel Battleworld: Series 3 Ultimate Armory and E.T. The Extra-Terrestrial: Light Years From Home Game both debut at the London show. 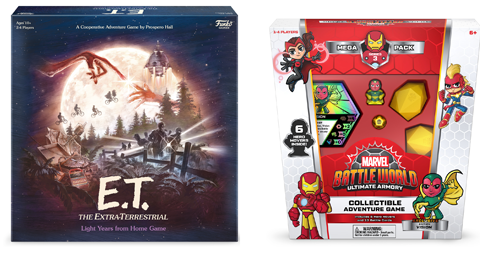 Inspired by the classic film from Universal Pictures and Amblin Entertainment – E.T. The Extra-Terrestrial, the game’s arrival will be perfectly timed for the film’s 40th anniversary, introducing a new generation to the much-loved film.

E.T. The Extra-Terrestrial: Light Years From Home is a cooperative game that re-creates the film’s iconic bicycle chase scene. Players race around the neighborhood using ramps and shortcuts to avoid federal agents bent on capturing E.T. As players have come to expect from Funko Games, the game features a beautifully illustrated board, components, and miniatures – including a charming miniature E.T. that fits inside the kids’ bicycle basket. The game will be available from summer 2022 and is suitable for 2-4 players, aged 10 plus.

Marvel Battleworld: Series 3 Ultimate Armory is the next in the popular collectible adventure game series, which comes with over 30 new characters rooted in the fabled Armor Wars storyline. In addition, the new series will feature a one-of-a-kind game mechanic, the Armor Token, to help the Heroes become more powerful, while also making battles more exciting. The new Ultimate Armory series will debut in spring in the UK.

Marvel Battleworld first debuted in the UK in 2020 and in Europe in 2021 with Mystery of the Thanostones, followed by Treachery at Twilight in 2021 in the UK market with a further launch across Europe in 2022. The collectible adventure has grown more popular with each new series, with over 100 collectibles now available to be enjoyed as a game either solo or with friends.

Ultimate Armory will debut in a Mega Pack with six characters including an exclusive Classic Vision variant with a foil card. Alternatively, customers can start with the Series 3 Battle Ball, which comes with a single Hero, as well as a Thanostone containing another mystery Hero. They can be collected to form the ultimate team of Marvel Heroes including Hulkbuster, Iron Man, Ms. Marvel, the Winter Soldier, and many more.

Funko can be found at the Toy Fair at Stand N3 or for more information visit funkoeurope.com