Gibsons is growing its TfL licensed collection starting with the release of four puzzles this spring. 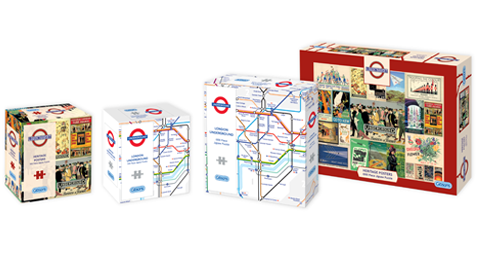 Following record sales of its London Underground inspired card game, Mind the Gap, Gibsons has expanded its partnership with Transport for London to produce a raft of new branded products. TSBA Group, Transport for London’s licencing agent, brokered the deal.

Mind the Gap the card game, first launched in 2017, is a proven best-seller and due to its success, Gibsons is growing its TfL licensed collection with the release of four jigsaw puzzles this spring, followed by two brand new games and additional puzzles later in the year.

In keeping with both Gibsons’ and TfL’s mission to become more sustainable, the new products will be produced using minimal single-use plastic. Made in the UK, the jigsaws will be manufactured using the thickest 100% recycled board and FSC approved paper. The puzzles will be available in 250, 500 and 1000 pieces and feature the iconic Underground maps and roundels, as well as a selection of the most popular graphics from Transport for London’s expansive poster archive.

The two new games have been developed in collaboration with talented game designers. They give fans the opportunity to competitively build Zone 1 of the tube map or race across London visiting famous stations while completing tasks along the way.

Julie Dixon, head of customer information design & partnerships at Transport for London, said: “London’s transport network is recognised the world over and has been a symbol of the city for more than 150 years. We are excited to be continuing our relationship with Gibsons and developing new products to delight people young and old, while also generating vital funds for wider transport improvements across London.”

Emily Charles, product development manager at Gibsons, added: “We are so pleased to be working with TfL once again. Mind the Gap continues to be hugely successful and we have high hopes for these new products joining the card game at the top of our best sellers list. The London Underground is recognised all over the world, so it’s great to work with such a famous brand and increase our TfL collection.”