Out of Order was developed with input from board game experts well known to the toy industry: Lesley Singleton, Deej Johnson and Billy Langsworthy. 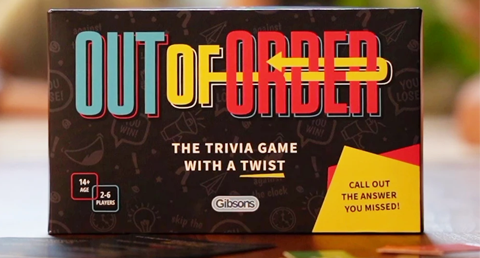 Gibsons’ first-ever party game, Out of Order is described as an extremely cheeky, fast-paced quiz game which puts players’ general knowledge to the ultimate test. The aim of the game is not to answer the questions correctly, but to call out the answer to the previous question.

Board Game Club founder Lesley Singleton, plus creative consultant Deej Johnson and Billy Langsworthy of Mojo Nation were brought in to work in collaboration with Gibsons on the after dinner party game.

“Developing a party game is new territory for us and we’re really excited to launch,” commented Samantha Goodburn, marketing manager at Gibsons. “We’ve been wanting to introduce a playful, after-dinner game for adults for a while now and when Out of Order was pitched to us, we knew it was perfect. What makes this game brilliant is the word-play – because the players have to provide the ‘wrong’ answer, the results are hilarious. There’s always someone who ends up in hysterics.”

The game starts with the Quiz Master reading out the first question to the person on their left. But instead of answering this question, that person simply says, “Out of Order!” The Quiz Master then reads out the second question. The same person now gives the answer to the first question, meaning that the answers are always out of order and more often than not, extremely cheeky.

Play continues like this for all five questions on the card. To make the quiz even harder, there is the option to add a 30 second time limit for each card. There’s also a fast fire bonus question at the end of each card, where any player can shout out the answer.

Out of Order is quick to start and easy to play straight away, and produces a whole host of amusing tongue-in-cheek results. The game is made in the UK and is completely plastic free; suitable for 2-6 players aged 14+.

Gibsons has a broad selection of games for all the family in its portfolio, including board game classics such as Chess, Draughts and Shut the Box, and family favourites such as 221b Baker Street, Mind the Gap and Pass the Bomb. For more information, visit www.gibsonsgames.co.uk.

Out of Order is available now and as a special launch deal, Gibsons is offering 15% off the game when ordered as a part of a carriage paid order between 13th September- 15th October 2021. A minimum of four units must be ordered to qualify. Contact sales@gibsonsgames.co.uk to find out more.