Created by Emma May, founder of Emmerse Studios, Quirk! is an entertaining card game of sounds, actions and mischief. 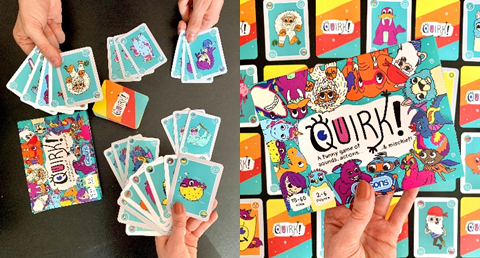 Gibsons has officially launched new game, Quirk!, ideal for 2-6 players aged five and up. The aim of the game is to collect the most ‘Quirks’, sets of three cards with matching characters, such as ninjas, sloths, dragons and superheroes. Players must embrace their silly side by doing their best impression of a character in order to ask for it from an opponent’s hand.

Quirk! was designed and created by independent game designer Emma May, who launched the original version on Kickstarter in 2017. Quirk! gained a strong following, with over 10,000 units sold around the world in just two years. The game was also one of Amazon’s top 100 best-selling travel games two years in a row, and ranked its 10th best-selling travel game in November 2019.

The new version stays true to the original game, with the addition of new characters, new packaging, double the number of cards and brand-new Mischief cards that mess up the gameplay whenever they appear. The new version also introduces the option to play a shorter game with less challenging characters.

Gibsons has made changes to the cards so they are easier to identify; each card type has a colour and a symbol that represents it, so players unable to see in colour can still recognise the different groups. The entire deck is also text-free, meaning the game can be enjoyed worldwide.

Emma May commented: “Visually, every aspect of the game has been improved, even down the quality of the cards for shuffle-ability. We’ve taken every effort to create a game that is easy to learn, accessible and a lot of fun for people of all ages. I’m very excited by the new game… it really is the ultimate version of Quirk!”

Gibsons product development manager, Emily Charles, added: “Quirk! is so much fun to play and fits perfectly with the Gibsons range. Every game is full of giggles; it’s exactly what families need in these difficult times. Working with Emma on the new version has been a pleasure and we are thrilled with the look of the new design.”