Shropshire-based company has delivered on its 2019 growth objective, reporting a significant increase in sales year-on-year. 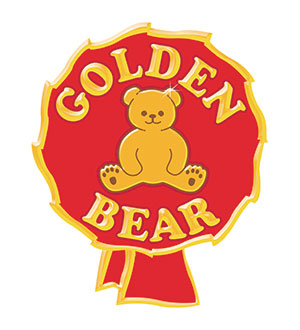 The company has seen its UK sales soar by 34%, citing the popularity of its pre-school licenced ranges among the contributing factors.

“We have seen our core licences such as Bing, In the Night Garden, Hey Duggee, Mr Tumble and Waffle gain considerable traction in 2019 and we are delighted to see them gain momentum and flourish,” said Barry Hughes, managing director.

The company launched its first range for Bing in July, with retailers reporting demand outstripping supply even before the new brand TVC aired in September. “Bing is already firmly established as a top 10 pre-school license and we anticipate further significant growth for the brand in 2020,” commented Barry.

Now in it’s seventh year as master toy partner for In the Night Garden, Golden Bear has seen continued growth for its range of toys for the CBeebies flagship bedtime show. With the number of Igglepiggle, Upsy Daisy and Makka Pakka toys sold being equivalent to all the new-borns in the UK each year, there is no sign of this abating.

Hey Duggee went from strength-to -strength in 2019, becoming the fastest growing pre-school plush licence. Year-on-year the brand has grown by 140%, and Duggee and his Squirrel club members are now established as firm favourites among pre-schoolers and parents alike.

The company has also enjoyed a big winner with its first ever product in the outdoor category – Smart Ball. The innovative counting football with lights and sounds was featured on This Morning and the Late Late Toy Show in December.

“The success of Smart Ball has been a tremendous boost for us and a big hit with retailers, with many saying they could have sold twice as many and had completely sold out by end of November. We see this as a great opportunity for retailers in 2020, with Euros fever hitting the continent in June,” added Barry. “We are very proud of our 2019 performance given prevailing market conditions. Initial signs are that 2020 is going to be even better as Toy Fair season will see the trade launch of great new products for Bing, ITNG and Hey Duggee and an awesome new product in the Smart Ball arena. We are also very excited about the UK trade launch of My Glitter Pop within the girls’ sphere, the delightful Love Monster within pre-school, and the thrilling introduction of our new Own IP Sassimals. We’re also expecting further international roll out of Smart Ball, Sassimals and Bing, which has already been a massive success in Italy and Poland.”