Hamleys’ plans include refurbishment of the flagship London store, plus expansion in the UK and beyond. 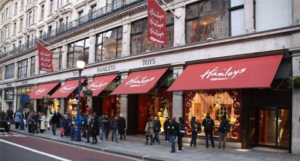 Hamleys has revealed plans to refurbish its landmark London store on Regent Street despite a slowdown in turnover created by the pandemic, which the company says has only added to existing challenges in toy retailing.

Reliance brands acquired Hamleys a year ago for approx. £70m, just months before the outbreak of Covid-19. Sumeet Yadav, chief executive for global retail business at Hamleys’ parent company Reliance Brands, said the expansion is a sign of confidence in the brand and comapny strategy. He commented, “It has been quite an eventful journey, but we are not holding back making long-term investments”.

In recent years, Hamleys has faced an increasing struggle to survive, as previous owners, including Ludendo Groupe and C Banner, failed to drive sales or a global expansion. The retail brand, which has 179 stores in 16 countries, has not made a profit for some time, with the most recent accounts, for 2019, showing a loss of nearly £10m on revenue of about £48m.

Like many stores around the world, the London flagship store was forced to temporarily close during lockdown and since reopening, the lack of tourism and lower footfall has continued to impact sales. Despite enthusiastic staff welcoming customers at the doors to the famous store, shoppers have been slow to return. In recent weeks, there have been reports of almost empty sales floors, as consumer footfall in the West End of London continues to suffer; it has been reported to be 63% down on this time last year, according to the New West End Company.

The company has also had to contend with the recent departure of UK chief executive David Smith, after only seven months in the role.

Hamleys is in the final stages of designs for a refurbishment of the seven-floor London store and intends to open pop-up concessions and stores in Manchester, Liverpool and Newcastle. There are also plan in the pipeline to expand into Western Europe, Australia, the US and Canada.

Despite challenges in store, where there are currently many restrictions on the retailer’s signature interactive toy demonstrations, Sumeet Yadav reports that online sales are  “through the roof”. The company’s website will be relaunched by the end of 2020, building on this success. He has not revealed how much Reliance is investing, describing the sum as significant and worthy of a brand that is 260 years old. The extensive plans are designed to resore Hamleys’ position as an exciting retail destination. Sumeet Yadav added: “The Hamleys experience cannot be diluted.”