Limited edition bears will be sold, with most of the purchase price donated to GOSH Charity, while a special Christmas tree will take pride of place in-store. 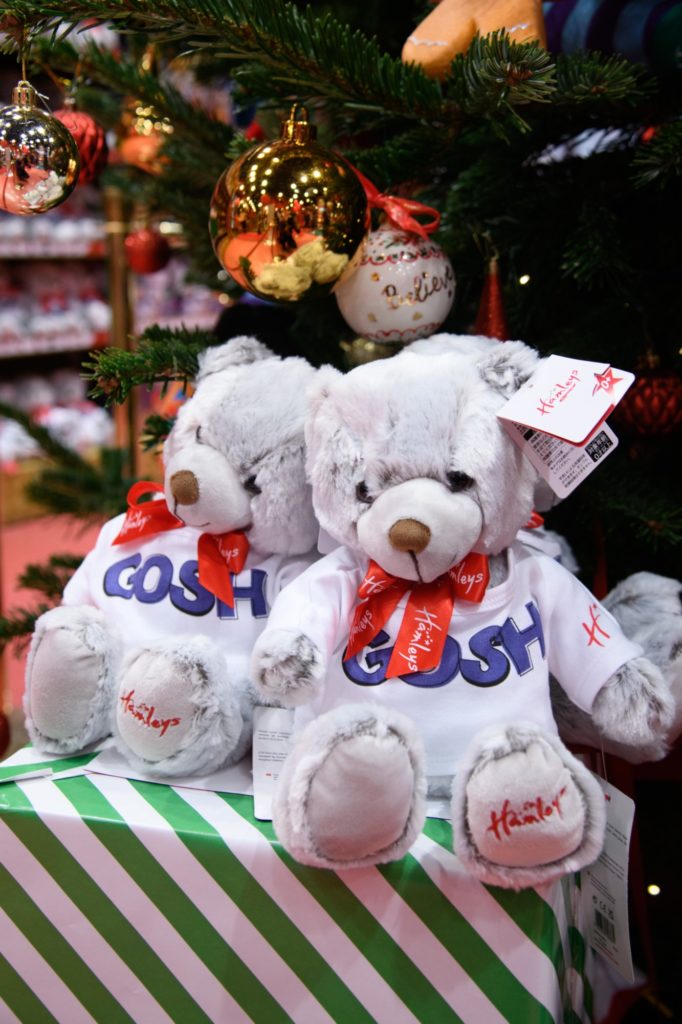 Hamleys will donate £16 from the sale of each £20 bear to Great Ormond Street Hospital Charity.

Hamleys has announced its Christmas partnership with Great Ormond Street Hospital Children’s Charity (GOSH Charity). This year’s collaboration includes the launch of a limited edition run of 1,500 Hamleys x GOSH Bears: £16 from the sale of every bear will be donated to the charity, helping to support seriously ill children across the UK. Hamleys will also be delivering exclusive in-store experiences and raising funds for the charity with the installation of a Tap to Donate machine.

To launch the partnership, Hamleys hosted a private in-store event for children treated by GOSH and their families, as well as other beneficiaries. Santa made a special appearance, gifting each child a magical Hamleys Christmas present donated by brands including Lego, Mattel and NBC. Families also enjoyed a fun-filled festive morning with exclusive Harry Potter, Frozen II and Elf experiences.

Further highlighting the partnership to shoppers, Hamleys has also revealed a special installation on the ground floor of its Regent Street store. A giant Christmas tree is themed to reflect the new GOSH Charity Christmas animation, ‘One Step Closer to Home’, which follows four-year-old GOSH patient Henry on his journey from GOSH to his home in Bridlington, East Riding of Yorkshire. Along the way, Henry – who receives specialist care at GOSH for a rare cardiac condition – is helped by magical stockings that represent donations from GOSH Charity supporters. The tree in store will be adorned with a giant stocking and a model of Henry at the top, built by acclaimed model maker Andy Gent, best known for his work on Wes Anderson’s Isle of Dogs. Hamleys will also be installing a Tap to Donate machine next to the tree ahead of Christmas, giving customers the chance to donate to GOSH easily whilst shopping.

Hamleys CEO, Sumeet Yadav, commented: “Hamleys is proud to be supporting GOSH Charity this Christmas by helping raise essential funds for its important work. The in-store event showed just a glimpse of the special, life changing work GOSH Charity does. At Hamleys, we believe in the magic of Christmas and Henry’s journey home is part of that magic. We look forward to showcasing our limited edition GOSH x Hamleys Bear and the beautiful installations in-store this festive season.”

Liz Tait, GOSH Charity’s director of Fundraising, added: “Christmas is such a crucial time for us at GOSH Charity and we’re so grateful to our incredible donors for their generosity and support at this special time of year. We’re thrilled to be partnering with Hamleys, whose Regent Street store has been decorated in the theme of our Christmas campaign. Hamleys’ enthusiasm in supporting the seriously ill children at GOSH is amazing and we’d like to say a huge thank you for its support throughout November and December.”