Some suppliers are concerned that Argos’s decision to cancel the autumn winter Argos catalogue has dampened year-on-year sales. 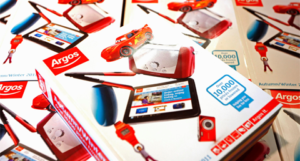 Several toy companies have contacted Toy World to register their concern that the lack of an Argos catalogue has had an adverse effect on sales over the past month. 2020 started promisingly for Argos, with numerous reports suggesting that the retailer was one of the strongest performers in the toy market during the lockdown period.

Up to the end of July, many suppliers had been tracking significantly up with Argos on a yearly comparison basis, and those in strong categories such as Games & Puzzles, Art & Craft and Outdoor Toys saw even greater levels of growth.

However, some suppliers have noticed that sales over the past months have not kept up with the levels achieved last year. The general consensus is that the lack of a physical Argos catalogue to stimulate early demand for new items is a major factor behind the performance over the past four weeks.

The launch of the Argos catalogue at the end of July has traditionally heralded the start of the autumn winter selling season for toys, with many launches timed to coincide with its release. Advertising campaigns are often planned to drive early ‘reads’, in the hope that this will result in greater stock ordering for the festive season, not just by Argos but all other toy retailers.

It is unclear yet whether this trend is widespread and, if so, whether it disproportionately affects specific categories, or if all toy sales have been similarly impacted. It is also unclear whether the whole toy market has ‘levelled off’ after an initial post-lockdown surge, or whether this short-term relapse only affects Argos. It could also be argued that sales over a four-week period in the summer are not necessarily anything to be unduly concerned about, although if the trend continues into the autumn, alarm bells may start to ring louder.

Other toy retailers are believed to be hoping to capitalize on the absence of the Argos catalogue: several suppliers have singled out Smyths, which is said to see its own catalogue as filling the gap left by Argos, providing children and parents with a handy reference guide from which to make initial Christmas lists.

Toy World would be interested to know if other suppliers have identified the same trend over the past three or four weeks – feel free to contact us in strict confidence.