Hasbro has released new versions of its classic game titles, Monopoly and Cluedo, which are available to purchase now. 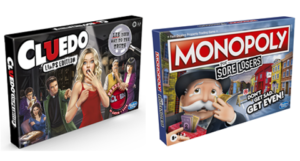 Monopoly for Sore Losers puts a twist on the original game concept; in this new Hasbro rendition, it pays to lose and pulling the short straw will see players rewarded.

Players collect sore loser coins as typically ‘bad’ things happen to them in the game and gain advantages to fight their way to the front. Once they collect four sore loser coins, they can trade their token in to play as the Mr. Monopoly Ultimate Sore Loser token. This means they can now get paid for landing on another player’s property, take a turn away from another player and more.

The game ends when all the properties have been purchased and each player has made it back to Go. Then the player with the most cash – sore loser or not – wins.

New Cluedo Liars Edition is Cluedo with added bluffing. In this version of the murder mystery board game, causing mischief and trouble will pay dividends.

Family and friends tackle an additional deck of investigation cards – or truth and lie cards. Players work their way through the interrogation room by exposing their competitor’s questionable poker face and hitting the liar button to call out the games’ biggest deceivers. If they are correct, that player’s rival must give up an evidence card.