The new Disney and Pixar’s Lightyear Monopoly board game will be available for pre-order shortly. 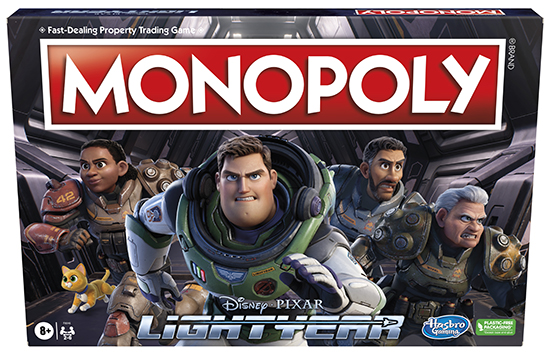 The Monopoly: Disney and Pixar’s Lightyear Edition board game takes players on a journey with Buzz Lightyear and an adventurous band of misfits on a hostile planet. Inspired by the hit movie, Lightyear, players race to build towers and bases as they move around the board collecting favorite locations. Players take actions shown on the Hyperspeed and Crystallic Fusion cards, ever wary of being led down the path to Zurg.

Suitable for 2-6 players, this edition of the Monopoly game is a great choice for family game night and makes an ideal gift for kids ages eight and up. The Monopoly: Disney and Pixar’s Lightyear Edition board game will be available for pre-order shortly in the UK.

Lightyear, which is Pixar’s first ever spin-off movie, features the voice of Chris Evans as the ‘real-life’ character that inspired the Buzz Lightyear toy and reveals how a young test pilot became the space ranger that we know him to be today.

Touted as the movie that Andy saw that made him obsessed with Buzz Lightyear as a child, the plot sees Buzz marooned on a hostile planet alongside his commander and their crew. Blaming himself, Buzz sets out to try and find a way back home through space and time, joining forces with a group of recruits and his charming robot companion cat, Sox, and trying to avoid Zurg to complete his mission.

The film is scheduled to be released in cinemas from June 17th, 2022.