The new Star Wars collection from Hasbro is set to be released in the UK this autumn. 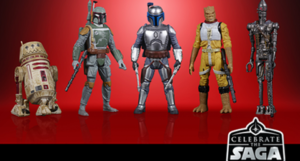 The new collection is suitable for all fans of the franchise, with a minimum age of four and above. The range covers a wide variety of price points, from £14.99 – £299.99.

New Vintage Collection figures include a Hondo Ohnaka and Darth Vader Figure, both measuring 3.75 inches, as well as the Tantive IV Hallway playset. Featuring premium detail and original Kenner branding inspired by Star Wars: A New Hope and Rogue One: A Star Wars Story, this highly detailed play set makes the perfect gift for any Star Wars fan this Christmas.

The new Celebrate The Saga Packs include multiple figures of various themes such as The Resistance, Bounty Hunters and Jedi Order. This collection comes in five and six packs and features movie-inspired design and multiple points of articulation, as well as character-inspired accessories.

Much of the new range can be pre-ordered now, ahead of the release date this autumn.