A partnership agreement with Vidglo will see the Terraria range released for the back end of 2021 and into 2022. 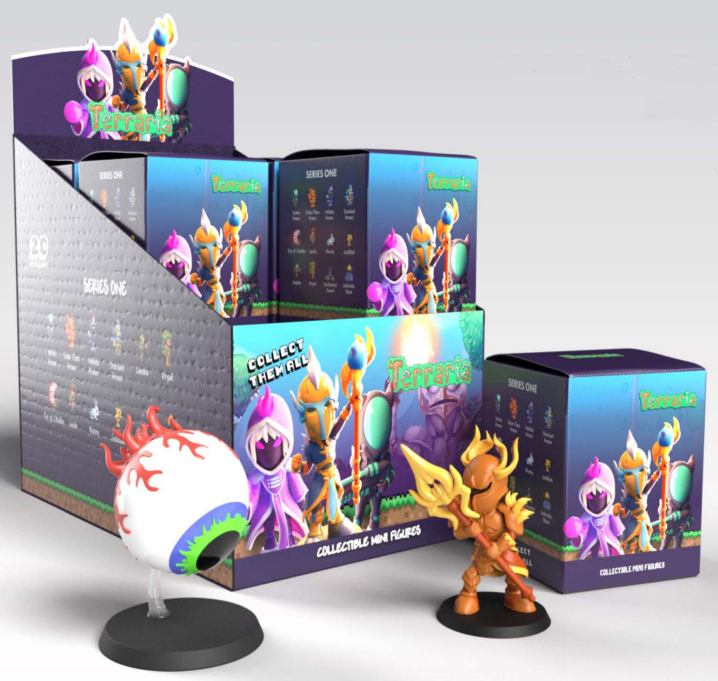 Vidglo and Heathside Trading have been working on a range of up to the minute products that are sure to be popular with Terraria players and fans. around the globe.

Released by Re-Logic for PC in 2011, and since expanded to multiple gaming consoles and mobile platforms while becoming a global cultural phenomenon, Terraria has delighted players with continuous updates, making it one of the most successful games of all time. The game boasts one of the largest and most loyal player communities worldwide.

Nearly 38m units have been sold, with 8m sold in the last year and a half alone. Enjoying the accolade of the No.1 played game on Steam 250, Terraria has also boasted the 6th highest all-time peak concurrent players on Steam in 2020.

Vidglo/Heathside has exclusive global rights and is in discussion with companies around the world regarding distribution. Products will include figures, collectibles, blind packs, badges and puzzles amongst the first ranges. Plans are already underway to expand upon these initial ranges, in ways that will keep the brand and products fresh and exciting to Terraria players.

John Nelson, partner at Heathside Trading, said: ”Once again, we are pleased to be working with a team of people who bring some of the best products on the most relevant and popular games to market. We could not be more excited for the release of Terraria consumer products worldwide.’’

Sam Lockett, CEO, Vidglo added: “Very few games are as loved or as lasting as Terraria which has seen extraordinary growth over the last decade. We have worked hard with the Re-logic team to develop a product offering unlike anything  released before, that can be enjoyed and appreciated by all Terraria fans, old and new.”