The Irish kids-tech specialist Holotoyz has announced that its funding efforts have raised €1m to be used for global expansion. 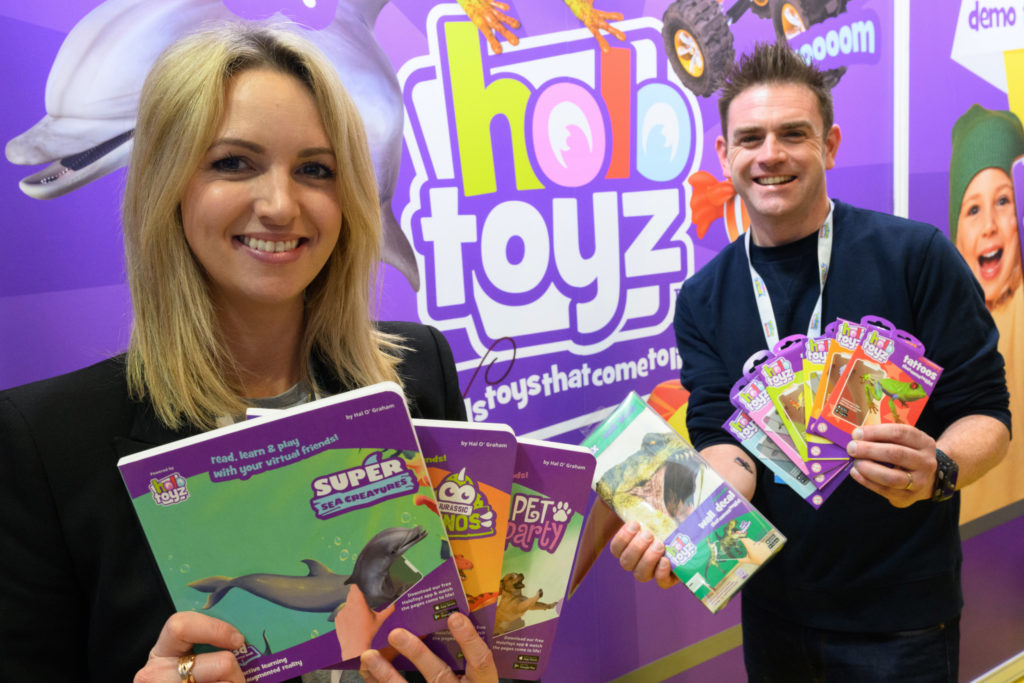 Holotoyz, which makes stickers, books and decals that come to life through the magic of Augmented Reality (AR), has raised €1m in funding. The company’s co-founders, the husband-and-wife team Declan Fahy and Kate Scott, say the money will be used to create jobs and fuel its expansion into new global markets.

Speaking to the Irish Times, Declan said: “The first thing we’re going to be doing is hiring Irish-based people to be able to help grow this both from an admin perspective, because that takes a lot of the heavy weight and heavy duty away from Kate and I, but also in sales and marketing as well.”

He added: “The second is going to be development of new products. In toys it’s really important that every season you innovate, but also refresh your brand. So developing new products, but also working more along the lines of core toy products.”

In an exclusive interview with Toy World in May 2022, Kate explained how Holotoyz AR tech enhances physical play. The company’s books, stickers, tattoos and wall decals can be enjoyed either with or without the 100% kid-safe app Holotoyz has created for the purpose of bringing the AR to life. The tech is an ‘as well as’, not an ‘instead of’ addition to traditional physical play, something the co-founders are keen for parents, retailers and licensors to understand.

Just over two years after the company was founded, Holotoyz has major licensing deals under its belt with Paw Patrol and Sonic the Hedgehog, and won Silver in the Editor’s Choice Awards at London Toy Fair 2022 following a snap decision to exhibit following the cancellation of this year’s Spielwarenmesse.

Fuelling its next stage of growth, the latest funding round was led by Irish tech veteran John Herlihy and Molten Ventures’ Brian Caulfield, who were early investors in the company. The Irish Times reports that other backers in the round included Shipyard Technologies chief executive Garry Lyons, Movidius co-founder Sean Mitchell and MongoDB’s Shalena O’Connell, along with a number of investors through the HBAN Angels network. The company has also been backed by Enterprise Ireland through its High Potential Start-up programme.

Holotoyz has set its sights on growing its international distribution network. Its licences are both available and popular in a wide range of countries, while the core range of generic product – which will never form less than 60% of the business – holds global appeal. Declan also says London Toy Fair showed he and Kate there’s a ‘hunger’ within the toy industry for a localised app that offers something for everyone no matter where they’re from. This, alongside the funding, will help turn Holotoyz into a truly global brand.