As part of its anniversary celebrations, Hornby has also unveiled new products in collaboration with Corgi. 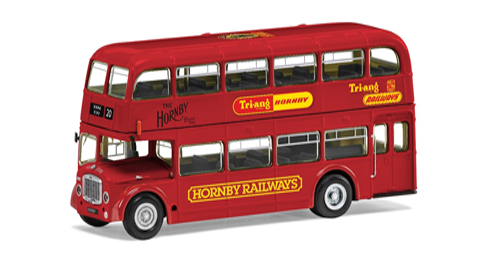 To celebrate the company’s official anniversary month, Hornby has introduced the #Hornby100 Social Media Takeover, which will last throughout the whole of July. With daily postings being focused around Hornby over the last 100 years, whilst also involving customers in interactive posts to show what makes Hornby so special to them, the anniversary month is set to be full of exciting content.

The company kick-started the campaign last week and has since announced a collaboration between Hornby and Corgi, with the unveiling of the Hornby Centenary Bristol Lodekka.

In 1920 Frank Hornby launched Hornby Trains with the first model being a clockwork Gauge ‘0’ pressed tinplate locomotive, produced initially in four different railway company liveries of the day. 1938 saw the launch of Hornby Dublo where the scale of the models were roughly half of Gauge 0. In 1948 manufacturing at Binns Road, Liverpool, recommenced with the production of both the Hornby 0 and Hornby Dublo trains. 1950 saw the first Rovex train set produced.

The livery on the Bristol Lodekka carries many of the brand names and logos synonymous with Hornby over the last 100 years, with the destination board displaying either Binns Road No. 20 or Westwood No. 64, denoting the year that Lines Bros obtained Hornby.

The models are available to order via both the Hornby and Corgi websites or with Hornby/Corgi stockists.