BrickPunk is now in stock in the lead up to the busy Christmas period, when Hornby believes the range will come into its own as a gifting opportunity. 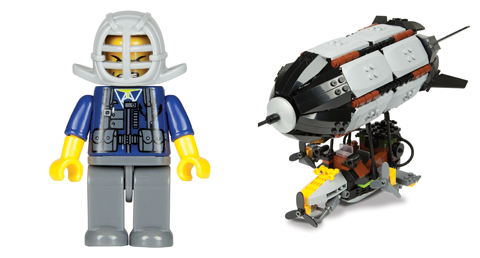 Designed in conjunction with Bassett-Lowke SteamPunk Models, Hornby has launched BrickPunk- a new construction brick range which is markedly different to anything else on the market. The BrickPunk range consists of a series of construction kits which feature between 121 and 563 pieces, providing hours of entertainment for children and also kidult builders. Each kit also includes a figure to fit in with the model theme.

The range comprises kits including horses, a tractor, steam walker, tank, glider and airship, which all tap into the Steampunk genre, giving them a distinctive look and feel.

Hornby’s Montana Hoeren told Toy World: “BrickPunk takes Steampunk to another level. With price points ranging from £10.99 -£27.49, these sets make ideal Christmas gifts for not only children, but adults too. Our design team used many complicated building techniques to make the models extremely realistic, but they are easy enough for anyone to put together. The pair of Steam Horses has had a particularly strong reaction from everyone who has seen them. All of the models are sophisticated enough to appeal to adults – the finished models don’t appear to be made from brick pieces.”

Hornby says the world of BrickPunk is a world of war between empires and eco warriors that despise them. During this never-ending fight for justice, builders are invited to help construct steam machines.

The Steampunk fantasy alter ego hobby has become a global phenomenon among enthusiasts of all ages and genders, and such is its popularity that there are now many events and conventions attracting large numbers of participants dressed in a cross between historical and fantasy-based outfits, with the design heritage firmly entrenched in the Victorian era.

Under the Bassett-Lowke brand, Hornby has created a fascinating assortment of Steampunk inspired models and accessories to allow a fantasy Victorian world to be created. Last year, Steampunk inspired model railway items were launched including specially created military locomotives, wagons, buildings, figures and other accessories. With the BrickPunk range, this world can now develop further for fans of the genre.