If you build it, they will come …it’s the Friday Blog!

It’s good that we have moved to the stage where face-to-face meetings are very much back on the agenda, and I’ve been delighted to be able to spend time out and about seeing a few clients and retailers this week.

Last weekend I took a trip to Derby (not a phrase I use too often, to be fair) to catch up with Dave Middleton on the opening day of his new Derby store. It’s not always easy to fit store visits into our busy monthly schedules, but the bank holiday weekend gave me the perfect opportunity to get out into the field and see the new branch first-hand. And very impressive it was too – how reassuring to see a store packed with a queue of customers stretching the whole length of the store and out into the shopping centre itself…in April.

Fair play to Dave and his team – anyone who follows him on LinkedIn will know just how many long days and all-nighters he had to pull to get the store ready for opening day. It was similar to the night before Toy Fair; you look at the chaos in the halls and think “this will never be ready for tomorrow morning” – and yet by 9.00 the next day, everything has somehow come together in time.

But without doubt, all the hard work and sleepless nights were worth it in the end – the result is a great new store, over double the size of the previous Midco unit in the Derbion Centre, full to bursting with great product. A host of visitors dropped in during the day, including legendary toy specialist Alan Caswell, Pikachu (his first-ever appearance at a retail store apparently), JJ from CoComelon, Blue from Blues Clues, as well as numerous sales reps and agents.

Of course, there are never any guarantees; you don’t need me to point out that the UK economy is in a bit of a mess right now – a perfect storm of global factors way beyond our control, exacerbated on this tiny island by the never-ending fiasco of Brexit. ParcelHero estimates that the loss of exports has cost the UK £9b a year, and while the toy sector losses are probably relatively modest in comparison to many other businesses, it all has a knock-on impact on consumer spending.

However, I remain a firm believer in the ‘If you build it, they will come’ mantra – especially if you know what you are doing. When I see busy toy stores and happy store owners who are looking to expand their businesses, it reinforces the fact that it is perfectly possible to thrive in the face of adversity…providing you are passionate, committed, and above all, good at what you do.

And there are plenty of businesses like that across the toy market – Spin Master became the latest company to post fantastic Q1 results this week, following fellow corporate giants Mattel and Hasbro in growing sales significantly over the first three months of 2022. We also caught up with the Schleich global management team this week, during a whistle-stop visit to the UK and Ireland. On top of having its best-ever first quarter, there are some major changes coming up at Schleich soon, and we are very much looking forward to sharing details of the exciting company rebranding and its vision for driving the business forward in the July issue of Toy World.

Schleich has also set the bar high for companies hosting the Toy World team in the future: coffee, biscuits, nice lunch…tick. Social media megastar Teddy the Shetland Pony, a real, live actual tiny horse, in the flesh…now that is something you don’t see every day during a client visit. Watching a pony casually travel up several floors in a glass elevator really is a sight to behold, and the queues to have a photo taken with him were almost as long as the queues in Midco Derby at the weekend. I’m very much looking forward to seeing how other toy companies top that on future visits.

There have also been some notable appointments officially announced this week. Grant Gie has joined Creative Kids as UK MD, marking the next step in the US crafts and activity specialist’s global expansion plans, while popular toy sales dynamo Edel Siddle has joined DKB Toys and Distribution as field sales manager. I can also confirm that Ravensburger has appointed its new MD, and the Clementoni country manager role has also been filled – news on these new appointments as soon as we are able formally announce them. There are a couple of other major announcements coming further down the line – suffice to say the job merry-go-round has well and truly sprung into life.

Good news this week for BLE, with the announcement that the Elizabeth Line will finally go into service later this month. Among other things, it will connect ExCeL to central London in 15 minutes, which will be a game changer for BLE and any other shows taking place at the venue. All that we need now is a couple of other pubs to open nearby (I know a little gem not too far away, but I am keeping that a secret, so it doesn’t get completely packed out).

Good news for Toy World too this week, as our bumper May issue landed on desks bang on time – you can read the digital version here. It’s another fantastic issue, with some great content – the biggest Toymaster May Show preview you will see anywhere, a deep dive into the Dolls & Collectibles category and a special extended Licensing World section, bringing you all the latest licensing news, plus details of the latest properties and licensed merchandise hitting shelves in the coming months.

Finally, who wants to see a picture of Instagram star Teddy the Shetland Pony and a bunch of toy people looking in no way bemused at what is going on, apart from Rachael who loves horses (tiny and full sized) as much as I love music… 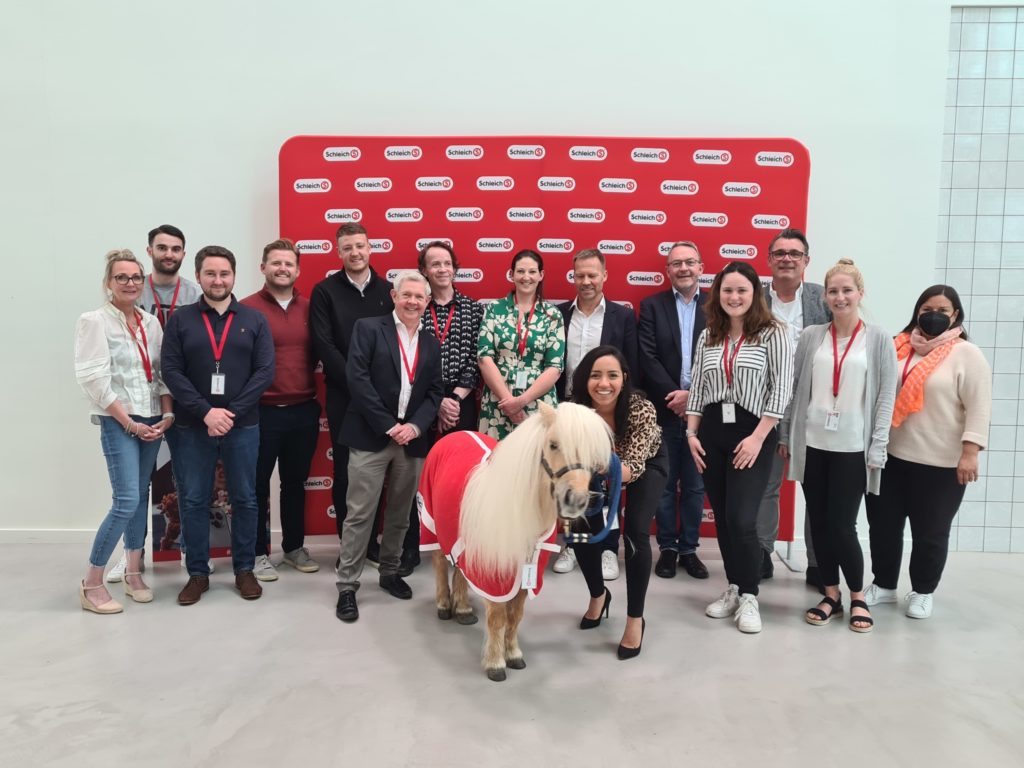