The Shellies are characters from the Bloopies series that introduce new and playable unboxing technology to the brand. 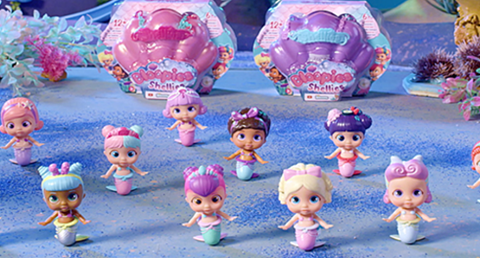 IMC Toys has unveiled a new collectible range this year called the Shellies.The miniature mermaid collectibles were revealed at London Toy Fair in January and received a positive response from customers. Following on from the success of the Bloopies Mermaids, the Shellies join the well-established Bloopies brand, which IMC Toys is looking to strengthen and grow in 2020.

IMC Toys continues to innovate with the Bloopies Shellies unique underwater unboxing. When placed under water, the shell magically opens to reveal a character inside. Each character has her own six personalised accessories and comes with a treasure map, which is used to release the pearl hidden inside the shell. There are 12 Shellies to collect including one rare and one ultra-rare. The shell itself comes with a chain, so once opened, it can be used as a bag.

Bloopies Divers, Mermaids and Shellies have kicked off an animated series on YouTube which follows the characters on their adventures. The first season consists of 13 five minute episodes and has achieved more than 1m views worldwide in under one month. The Shellies digital launch will be joined by paid influencer campaigns, giveaway collaborations and dedicated social media channels. This will all be supported with a strong digital campaign with 3.5m views in Q1 2020, reaching 43% of kids and broadcasted on Ketchup TV.

The Shellies retail launch will be supported by extensive retail marketing activations and a strong TV campaign. TV is scheduled to run throughout the whole year, starting in early February.

Sue Barratt, country manager of IMC Toys UK, said: “As a business that is fully focused on kids play and development, the unique design and content behind Shellies creates endless possibilities of self-development and imaginative play. Staying ahead of what works at retail and with the positive reaction at Hong Kong, London and Nüremberg Toy fairs, we are convinced that Bloopies Shellies will be an absolute success”.