Lockdown 1 was largely characterized by a coming together of the UK community in the face of adversity, a collective camaraderie aimed at defeating an unknown enemy. Many people talked about ‘Blitz Spirit’, even though they weren’t even born then. Lockdown 2 definitely feels different: people are quite understandably starting to feel a little tetchy, and it’s all getting a bit fractious out there. If Lockdown 1 could be summed up by Captain Tom’s nobility and clapping for carers, an abiding memory of Lockdown 2 will be Midco Toys’ Dave Middleton filming himself roaming the aisles of his local Tesco, bemoaning the fact the supermarket can stay open to sell toys while he can’t. “It’s not fair” he points out – and he’s right. It isn’t fair.

The lack of consistency has rankled with shop owners and consumers alike – although from different angles. Consumers don’t see why they shouldn’t be able to buy whatever they want if a store is open, regardless of whether an item is essential or non-essential (and who decides what is essential anyway…?), while independent store owners see their livelihoods at risk by being forced to close during one of the peak months of the year.

Exacerbating the situation, we are still in the dark about what happens after 2nd December. Numerous retail executives have called on the government to offer some clarity about the next steps, yet ministers don’t seem to appreciate that retailers can’t just make arrangements to re-open the night before. There are staff rotas to organize, stock to pull together – particularly for omni-channel retailers, do they divert stock to the stores or to the warehouses that fulfill online orders? Sadly, as most politicians have little experience of business (or indeed the real world), the pleas of retailers appear to have had little effect so far, as the government continues to prevaricate and talk in riddles about what may or may not happen next month.

The BTHA and the TRA have joined forces to make their own request to the Prime Minister – that he should add toy retailers to the essential retail list. The impassioned letter makes a compelling case and few could find fault with its logic – but unfortunately that hasn’t necessarily been a pre-requisite of the decision-making process thus far. Of course, there are no easy decisions, and a relaxing of the lockdown in December will almost certainly result in measures being tightened again in the early part of next year. From a toy retail perspective, I would imagine that is a trade-off most toy retailers and suppliers would be prepared to make.

That said, I suspect a lot of children will receive money or vouchers for Christmas this year especially from relatives who may not want – or be able – to travel. NPD produced a report in the US, suggesting that 30% of festive shoppers are planning to spend more than last year, because they have fewer expenses related to activities such as eating out and travel, while 40% said that would be buying more gifts to bring joy during challenging times. And over 50% said that they would be sending gift cards or money. So while January sales will never compare to December turnover for the toy market, we could still see a nice boost in the New Year – and if stores can stay open, they can get their share, rather than sitting back and watching as yet more money flows into Amazon’s coffers. That wouldn’t be fair either.

However, there is still an awful lot that can happen between now and January. Black Friday seems to have turned into a month-long event rather than a specific weekend this year – no surprise with all the capacity issues within delivery services. Indeed, the whole supply chain is creaking at the moment – logistics companies have been warning of severe disruption at ports for some weeks, with some ships prevented from unloading or even being forced to divert to other ports hundreds of miles away. Who could possibly have foreseen this kind of chaos when the port of Felixstowe appointed Chris ‘Failing’ Grayling as a part-time advisor (£100,000 a year for 7 hours ‘advice’ a week)? I for one am truly amazed that a man with his incredible track record has stuffed it up so badly. If ever a man had the ‘reverse midas touch’…

I was very sad to hear that Jimmy Hunter passed away last weekend. Another toy trade legend has left us – Jimmy was one of those ‘once met, never forgotten’ characters who was a passionate advocate for the toy industry throughout his distinguished career. Through his own Hunter Toys company and his sterling work for the BTHA, Jimmy was always willing to break new ground, and he was never less than forthright and honest in everything he did. The Golden Teddy awards are just a part of the great legacy he leaves behind, and the many comments we received show how well loved and respected he was within the toy community.

I trust you all saw the toy-focused episode of Philip Schofield’s ‘How to Spend it Well at Christmas’ this week? Companies whose products have featured in the programme in previous years always tell me that it shifts units – I very much hope that happened again this year. As for the programme itself, it perhaps felt a little more disjointed than in previous year and perhaps some of the segments felt a little out of place (adult inline skates or marshmallow and beer advent calendars anyone?). As ever, many great toys shone through, while it was also heartening to see a selection of inclusive toys being prominently featured – it’s nice to acknowledge some of the great work being done by the toy industry, as well as focusing on its commercial success. Ultimately, if the show has moved the dial again, that will be good news for the whole toy community – and we need all the good news we can get at the moment.

Finally, like many of you, the Beano was part of my childhood, so I’m delighted to see it continues to raise a smile so many years later. This week saw the appearance of the first-ever ‘BeanOld’, a special edition aimed at adults featuring topical satire such as the marvellous takedown of Dominic Cummings below. And if the government completely stuffs up the decision about what happens to so-called ‘non-essential’ retailers after December 2nd, I very much hope the ‘BeanOld’ gives it to them with both barrels. 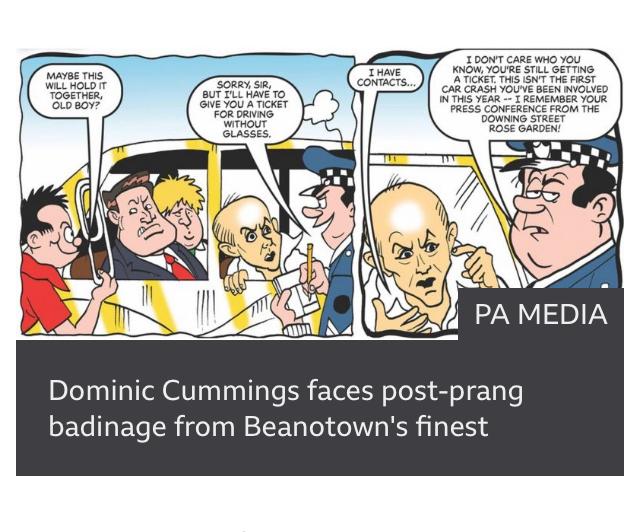